If turnover and number of companies are taken into account, Germany is in second place. Nearly 17 percent of foreign companies active in the Dutch private sector have a German parent company, versus an American share of 22 percent. German companies in the Netherlands achieved a total turnover worth 68 bn euros. They are mostly engaged in the trade sector, in particular wholesale of machinery and equipment for the manufacturing industry and other non-food. Next to trade, German companies are most often active in manufacturing industry.

The United Kingdom occupies third place, accounting for just over 10 percent of foreign-controlled companies, with a total turnover worth 52 bn euros in 2014. British companies are mainly engaged in the sectors trade and commercial services.

US companies account for 28 bn euros of value added

As in most companies under foreign control, most American companies are active in the wholesale sector, but companies with an American parent are frequently active in the ICT sector. Approximately 35 percent of all foreign providers of IT services in the Netherlands are US-controlled and 31 percent of ICT equipment wholesalers are subsidiaries of US-based parent companies.

In the entire wholesale trade sector, only 20 percent of foreign companies are owned by an American parent company. Less than 1 percent of all ICT companies is under US control. 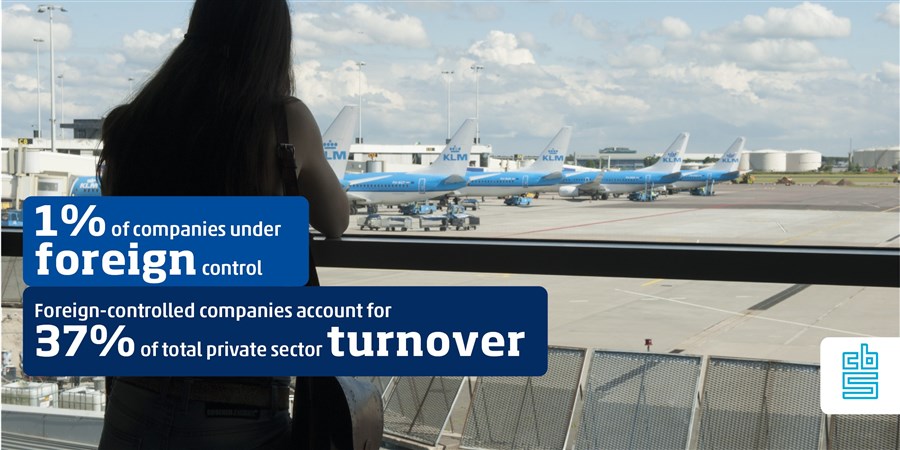 The Dutch private sector totals over 1 million companies; about 12 thousand (1.2 percent) are in foreign hands. Though small in number, they are important from an economic point of view. Collectively, these foreign companies accounted for 37 percent of total private sector turnover in 2014. This was also the case in the preceding years, as CBS reported earlier.

Additionally, these 12 thousand companies employ nearly 19 percent of all people employed in the private sector; 867 thousand persons are employed by foreign companies.

Germany most important European country for the Netherlands

The United States is in first place when it comes to numbers, turnover, value added and employment, but the position of the countries that follow depends on the manner in which companies are evaluated. On the basis of turnover results (68 bn euros), Germany is the most important European country active in the Netherlands, followed by the United Kingdom (52 bn euros).

On the basis of value added, France is the most important European contributor to the Dutch economy. A large part of activities of French companies is found in sectors with a relatively high value added, like transport and storage and many other servce-providing industries.

How the mathematics of complex systems contributes to statistics

COVID-19 and tourism in the Caribbean Netherlands

CO2 emissions from biomass burning on the rise

Manufacturing output prices over 20 percent up in October