More than half of the goods entering the Netherlands are either in transit or re-exported. Re-exports means the goods are temporarily under Dutch ownership, often undergoing minimal processing. Transit trade means goods remain under foreign ownership throughout. In 2014, a total of 591 billion kilos of goods entered the Netherlands, 34 percent of which were in transit, while 20 percent were re-exported, according to figures released by Statistics Netherlands (CBS) today.

The value of goods in transit and re-export is even higher when measured in euros: transit trade was good for 39 percent while re-exports accounted for 27 percent of the inbound flow. Combined, they make up two-thirds of the total value of goods entering the Netherlands, at a value of 625 billion euros. The remaining one-third was for domestic consumption or for processing by the Dutch industry.

The value of outbound goods in transit and more significantly in re-exports is slightly higher than that of the inbound flow. For re-exports, this is due to the goods having undergone some processing in the Netherlands. For instance, re-packaging of goods, addition of a user manual, diluting of liquids or a reduction in product temperature to prolong its shelf-life. 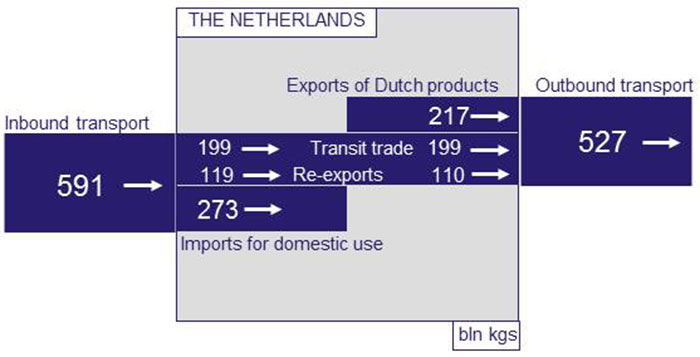 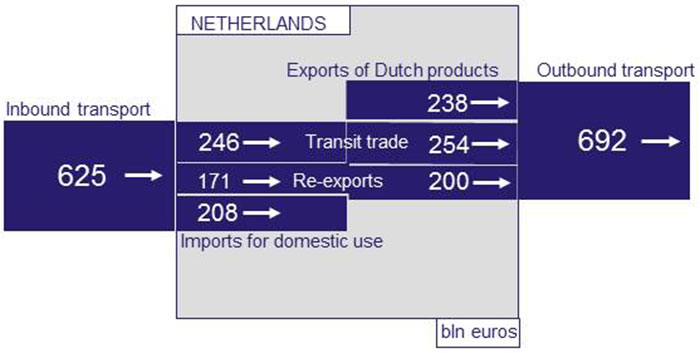 Bulk of transited goods are coal and ore

The gross weight of transited goods is dominated by coal, ores, petroleum (derivatives) and natural gas, which altogether make up nearly two-thirds of the total weight in transited goods. The vast amounts of coals and ores are characteristic for the transit business. Of all the inbound coals and ores  only a minor share is destined for domestic consumption or for re-exports.
Where the value of inbound goods is concerned, a different picture emerges:  vehicles, machinery and general cargo are far more dominant and represent 60 percent of all goods in transit.

Re-exports is the flow with the most expensive products

Among all flows of goods crossing Dutch borders, re-exported goods are most expensive with an average value of 1.82 euros per kg. These are followed by outbound transit goods (1.28 euros), Dutch-produced export goods (1.10 euros) and finally inbound goods for domestic consumption (0.76 euros). The differences are due to the mix of goods in these flows and the value added to the goods as a result of processing in the Netherlands.

How did export of goods develop?

How many seasonal workers are normally employed in agriculture?

Manufacturing output 1.3 percent down in February