What is the labour market tension meter?

In the labour market tension meter, tension is measured through a set of indicators for the demand for extra labour and the available labour supply. The tension meter is updated every quarter, around 45 days after the end of the quarter. 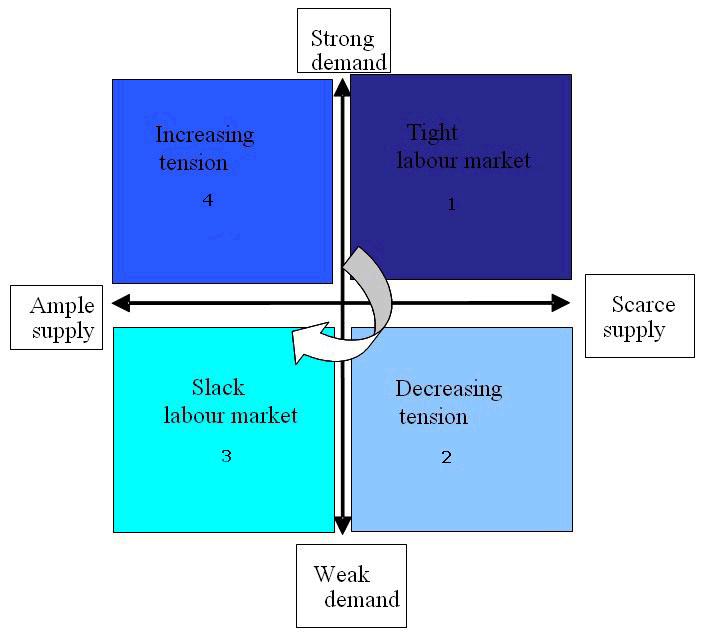 The horizontal axis represents the labour supply, the vertical axis the demand for extra workers. The resulting four quadrants correspond with the four possible situations on the labour market.

Tight labour market (top right) - demand for labour is higher than average, while the available supply is low (low unemployment).

Decreasing tension (bottom right) - demand for labour has dropped to below average while the supply (unemployment) is still low.

Increasing tension (top left) - demand for extra labour has risen to above average, but the labour market is not yet tight, because unemployment is still relatively high.

As from November 2013, the Tension meter has been simplified. Additional labour demand is now based on one indicator: the vacancy rate (number of job vacancies divided by the average number of jobs). In the original version of the Tension meter the labour demand was based on several component indicators, including workforce expectations in the manufacturing industry, business services, and temp agency branch.
In the new version of the Tension meter, labour demand and labour supply are calculated as standardised deviations from the mean in one complete business cycle. In the original version, they were compared with the mean of all previously observed values; as a result, when new values were added, this sometimes led to adjustments in previous results.

Exports to the UK account for 3.5 percent of GDP

Mortality during the coronavirus crisis

How manufacturers view the near future.

How large was the share of renewable energy in 2019? Available under embargo