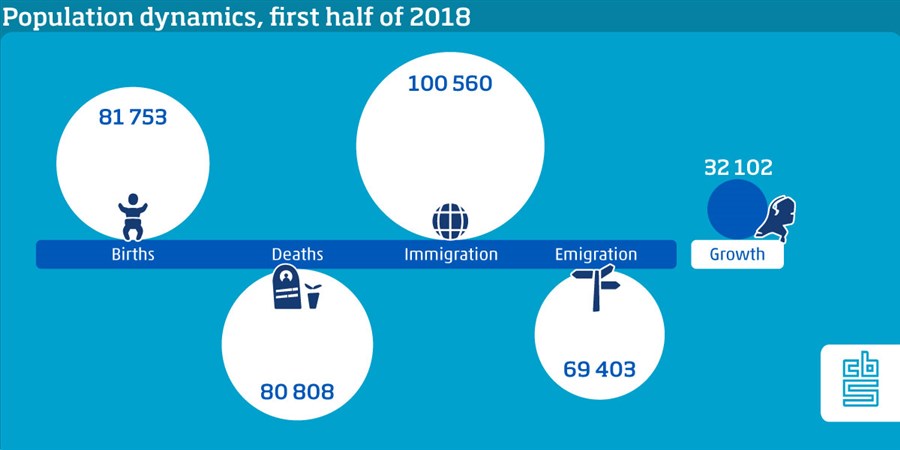 During the first six months of 2018, 82 thousand children were born and 81 thousand people died. Natural population growth therefore stood at one thousand, versus 4 thousand in the first half of 2017. In this period, the number of live births was virtually the same, while 78 thousand deaths were recorded.

Furthermore, over 100 thousand immigrants registered with a Dutch municipality, almost equivalent to the first six months of 2017 and 2016. The number of emigrants was the same as well: 69 thousand. As a result, net migration remained unchanged at 31 thousand. The Netherlands currently has 17.2 million inhabitants.

Higher mortality in first quarter only

In Q1 2018, 45.5 thousand people passed away, 3 thousand more than in the same period last year. Mortality was particularly high among people aged 65 or older. The Netherlands suffered from a long-lasting flu epidemic until mid-April.

In Q2 2018, mortality stood at 35 thousand, the same number as one year previously, and births exceeded deaths by 7 thousand. As a result, population was up by one thousand on balance over the entire first half year.

Net migration remained the same but the origin of migrants did change. Last year, migrants with an Asian background (including the Middle East) still had the highest migration balance. However, their number dropped. The number of Syrians registering with a Dutch municipality decreased in particular, from 11 thousand in the first half of 2017 to 3 thousand in the first half 2018. There are hardly any Syrians leaving the Netherlands: around 300 during the first six months.

On balance, however, more people with a European background (excluding Dutch) settled in the Netherlands. Polish people still constitute the largest group of immigrants. Just as last year, net migration from Poland amounted to nearly 5 thousand during the first six months. An increase is also seen in the number of people migrating from Bulgaria, Romania and the former Soviet Union. Net migration among this group stood at 5 thousand. The number of migrants with an African background was higher as well. There were mainly more migrants from Ethiopia and Eritrea, 2.5 thousand on balance.

One of the largest groups of immigrants are people of Dutch descent, namely almost 11 thousand in the first half of 2018. The group of Dutch emigrants was slightly larger, as a result of which there was a negative migration balance of 900 thousand. This number is low compared to previous years. On balance, over 1.6 thousand Dutch nationals left the country in the first half of 2017 and around 2.5 thousand in the preceding years.