On 21 March 1918, the Dutch House of Representatives passed a government bill to empolder large parts of the Zuiderzee. This project - the Zuiderzee Works, one of the largest hydraulic engineering projects in world history - commenced in 1920. The first part completed was the Wieringermeer polder in 1930. Empoldering of the Noordoostpolder was completed during the Second Word War, that of the Flevopolder in 1968. Plans for the empoldering of other parts of the Zuiderzee were cancelled. 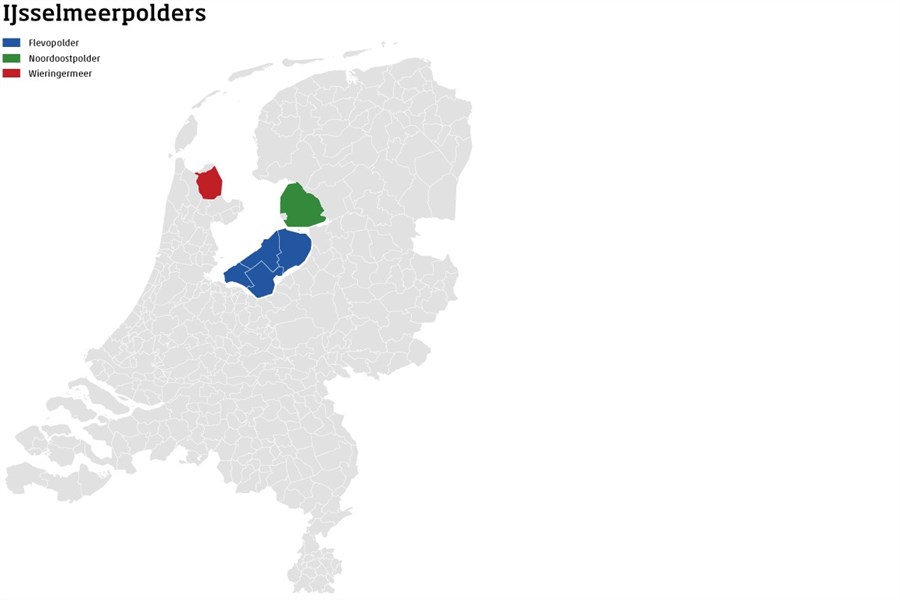 Altogether, this land area now amounts to 1,600 square kilometres, which is almost 5 percent of the total land area of the Netherlands. Of this area, 59 percent is located in the Flevopolder, 29 percent in the Noordoostpolder and 12 percent in the Wieringermeer.

It took some time before the land was brought into use for cultivation and the number of residents in the polders increased. The urban development of Lelystad and Almere in particular boosted population growth. On 1 January 2018, the Flevopolder had 345 thousand inhabitants, the Noordoostpolder 47 thousand and the Wieringermeer (now part of the municipality of Hollands Kroon) 12.5 thousand inhabitants.

More farmland than in the rest of the country

Originally, the polders were predominantly intended for farming. Agricultural use reached its highest level in the early 1990s with over three-quarters of the polder soil used as farmland. This had declined to 73 percent by 2012, i.e. 6 percent more than the overall average in the Netherlands. The reclaimed space was occupied by dwellings and office buildings (built-up area) as well as nature and recreational areas.