In this forecast, CBS uses a simulation model which determines population size at the end of a given year by offsetting births, deaths, migration and ageing against the population size at the start of that year. By performing this calculation for each year in the past, a progressive projection into the future can be realised. For this model, a probability calculation is performed for the number of births, deaths and migrations over a period of one year.  The number of immigrants also serves as input. 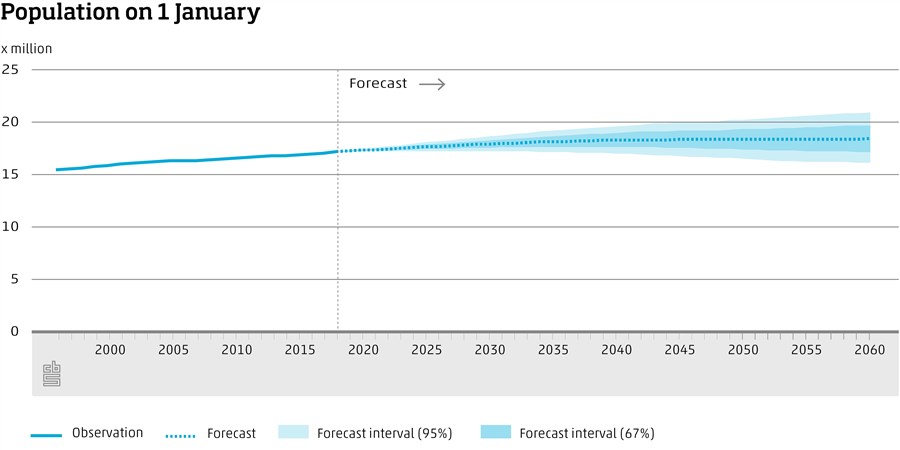 Growth mainly due to immigration and increasing life expectancy

The population is growing on account of two factors: migrant arrivals exceeding departures, and increasing life expectancy. Although the number of births will continue to rise in the next few years, eventually this will not be sufficient compensation for the rising number of deaths. Based on current insights, there will be more deaths than births among the population as of the late 2030s.

The number of migrants can fluctuate sharply from year to year. Therefore, immigration and emigration forecasts for the short term carry major uncertainties. There is more certainty in forecasts of births and deaths, although the related uncertainty will increase more sharply in the long term. Taking account of these uncertainties, further population growth remains likely at least until around 2040. In the ensuing years, the population could either grow or shrink. In all likelihood, the population will reach between 17.2 and 19.7 million by 2060.

Over the past two decades, the population has increased by 1.5 million inhabitants. Of this group, 86 percent were people with a migration background. International migration has been a major contributor in this development. Migration from other EU countries and from Asia, for labour as well as for studies, has risen sharply over the past decade. There has also been a significant influx of asylum migrants in recent years. On the other hand, migration from traditional countries of origin such as Morocco, Turkey and Surinam has declined.

Over the next few decades, the population of the Netherlands will grow solely on account of migrant arrivals, against a decline in the number of native Dutch inhabitants. As of 2017, 23 percent of the population have a western or non-western migration background. This share is expected to reach 34 percent by 2060. Over half of those with a migration background will have been born in the Netherlands, both now and in the future, with at least one of the parents born outside the Netherlands (the second generation).

The high birth rates immediately after World War Two and over the 1950 and ‘60s gave a significant boost to the current number of elderly people.  Another contributing factor is the rise in life expectancy, which is expected to continue.  According to this population forecast, the share of over-65s in the population will increase from 18 percent in 2017 to 26 percent as of 2040. An increasingly large share will be 80 years old or more.

The number of elderly people with a migration background will grow. This share is currently 14 percent, but is forecast to reach 28 percent by 2060.

For the time being, the number of 20 to 65-year-olds will stay around 10.1 million, followed by a decline around 2040 to 9.6 million and increasing again slightly to 9.8 million in 2060. Owing to the recent increase in immigration, the latter age group has started to grow since 2014 and a decline is not likely for a few more years.

Population forecasts are adjusted periodically in line with the most recent developments and newly gained insights. Compared to the forecast in 2014, adjustments have mainly been made in the field of international migration. In the future, not only immigration is expected to rise; the number of emigrants will go up as well, mainly on account of departing former immigrants. Due to a relatively high death rate since 2014, life expectancy has declined slightly. The number of births will drop over the next few years as more young women are postponing motherhood. By 2060, the Netherlands is expected to have 0.4 million inhabitants more than stated in the previous forecast. More details on the comparison with the previous forecast can be found in the background article (in Dutch only) Population forecast: 18.4 million inhabitants in 2060.

HICP up by 11.2 percent in November

Retail turnover over 4 percent up in October