According to the latest forecast, life expectancy in the year 2023 will be lower than was foreseen previously in the 2016 forecast (20.7 years). This is due to the fact that the new forecast is based on updated mortality figures. There were more deaths over the last four months of 2016 and first eight months of 2017 than were expected in the previous forecast. Such fluctuations in actual mortality influence life expectancy slightly on a yearly basis. 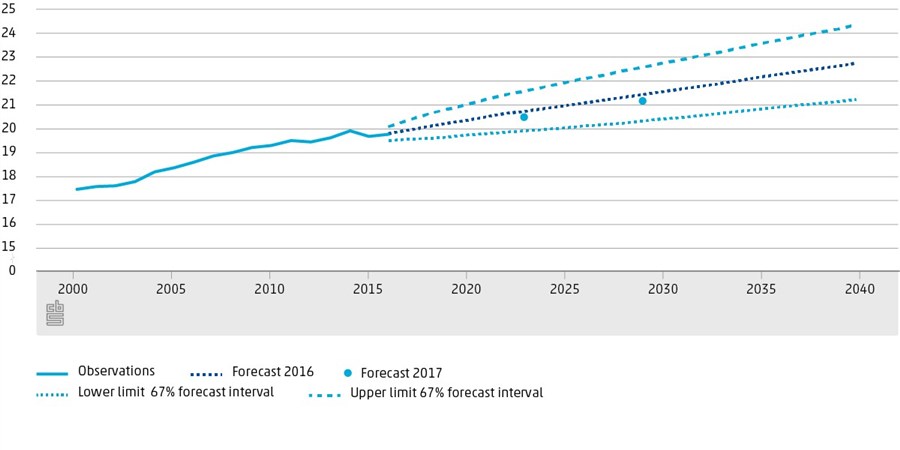 The annual CBS population forecast aims to describe the most likely future demographic developments for the Netherlands. One aspect of this is the life expectancy forecast. For this, CBS uses a model which has been developed in the international scientific community. The model is based on the expectation that the steady declining trend in mortality across western Europe will continue in the long term , and this implies that short-term acceleration and deceleration in mortality have a less adverse effect on forecasts than when based solely on the Dutch trend. CBS indicates uncertainties around the life expectancy forecast by calculating forecast intervals (see the above graph). These give an impression of the expected accuracy of the forecast.

Based on the present state of public health and medical technology, people at age 65 had an average remaining life expectancy of 19.8 years in 2016. This is over five years more than was the case in 1956, when the General Old Age Pensions Act was adopted. Progress in medical knowledge and technology as well as improved hygiene, nutrition and living conditions have contributed to a strongly decreased risk of premature death. Life expectancy does not increase evenly over the years. The trend may grow faster or slower in certain periods. Like in other western European countries, there was a significant increase in life expectancy at age 65 since 1950. This is now expected to amount to 20.5 years by 2023.