The rest of this group of unemployed (over 3.8 million) were people who had not been looking for work recently and were not immediately available; their number has declined by an average of 3 thousand per month. The Employment Insurance Agency (UWV) reported a further decrease in the number of unemployment (WW) benefits to 362 thousand in August.

The International Labour Organization (ILO)’s unemployment indicator is often used to enable comparison of cyclical developments on the labour market in different countries. According to this indicator, the ‘unemployed’ comprise all persons aged 15 to 74 years without work who have been seeking and are currently available for work. As described above, there were 426 thousand such people in August, equivalent to 4.7 percent of the labour force. This was 4.8 percent in July.
This figure comprises not only all persons without work who are looking and part-time workers who wish to work more hours. People who do want to work but who have not looked for work recently for various reasons and/or were not immediately available for work, fall outside the ILO definition of unemployment. CBS describes these groups of people with the help of additional indicators. Weekly working hours do not play a role in monthly data on the active labour force. (i.e. those in paid employment). All those employed are included, regardless of the number of hours worked. CBS publishes quarterly figures on the number of hours worked by the active labour force.

UWV: Slight decline in number of WW benefits in August

The number of current unemployment benefits decreased slightly in August relative to the previous month (-0.6 percent) and stood at 362 thousand at the end of August. The number of current WW benefits is now more than 15 percent lower than one year previously.
The month-on-month decline was seen across nearly all occupational groups, but was strongest in agricultural, transport and logistics occupations. This applied to lorry drivers in particular with a decline of 10 percent from July to August.
When examined by sector, the decline was strongest in construction (-5.2 percent). On the other hand, the number of benefits went up in education, by 10.9 percent. In this sector, an increase in the number of unemployment benefits over the summer months is an annual phenomenon. Over the past few years, however, the increase has levelled off rapidly in the occupational group of primary school teachers.

In the period January to August 2017, UWV provided 277 thousand new benefits: a decline of 17.3 percent compared to the same period in 2016. In nearly all sectors, the number of new benefits decreased year-on-year. The sharpest drop was in construction (-47.0 percent) and multiple stores (-44.1 percent).


Fewer unemployed people over the age of 45

Over the past three months, unemployment (the ILO unemployment indicator) mainly decreased among the group aged 45 to 74 years. The number of unemployed in this age group stood at 163 thousand in August, versus 187 thousand last May, representing an average decline of 8 thousand between May and August. In the same period, the number of unemployed in the younger age groups did not decrease notably.

Every month, CBS publishes figures on the total (employed and unemployed) labour force as well as the number of people not in the labour force (ILO definition). However, this does not include the total unused labour potential, i.e. other groups of people aside from the unemployed according to the ILO indicator. CBS publishes quarterly on the size of these groups. Therefore, the overall picture provided below is based on the latest quarterly figures. Development of the total unused labour potential closely follows developments in unemployment according to the ILO definition.


In Q2 2017, nearly 8.6 million of the 12.9 million people aged 15 to 74 years were in paid employment and, on average, 451 thousand were unemployed (ILO unemployment indicator). These two groups together make up the labour force. The other group (nearly 3.9 million) is not included in the labour force.
This group mainly includes people who are not willing or able to work (3.2 million), e.g. due to training and education, receiving care, illness or advanced age. In addition, there were more than 200 thousand people in Q2 who were willing to work, but were not actively seeking and were also not immediately available. These include people in training or education or participating in volunteer work. Furthermore, there are people who have either been seeking work recently (163 thousand) or been immediately available for work (273 thousand). 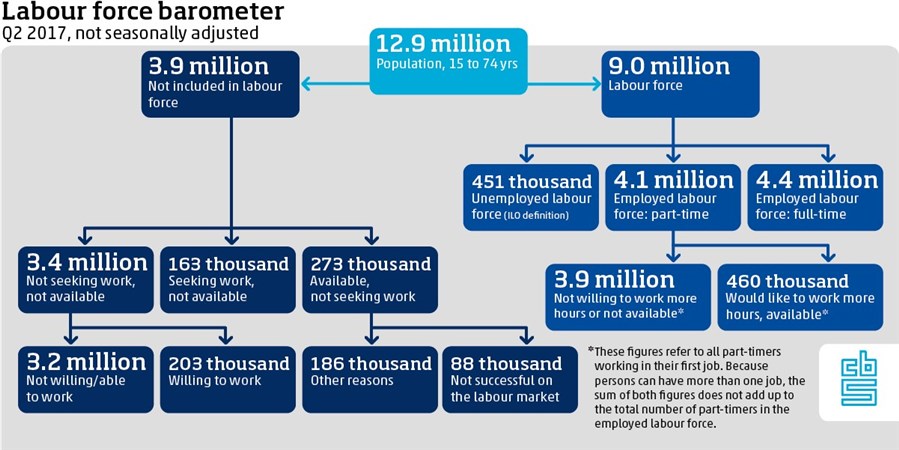 
Unused labour potential does not only comprise people without work. Among the 4.1 million people working part-time, 460 thousand were seeking more work in Q2 and were immediately available for more hours. On average, they wish to work an extra 12.6 hours per week.