The other people without work, over 3.8 million, had not recently looked for work and/or were not available. Their number fell by an average of 4 thousand per month. The Employee Insurance Agency (UWV) reported a further decrease in unemployment (WW) benefits: a total of 364 thousand benefits were paid in July.

Decrease in unemployment (based on ILO definition)

To be able to compare cyclical developments in the labour market between countries, the unemployment indicator of the International Labour Organization (ILO) is often taken as a measure. According to ILO’s definition, the group of unemployed people includes all 15 to 74-year-olds who are without paid work but are actively looking and are immediately available. As indicated above, this number stood at 436 thousand in July, i.e. 4.8 percent of the labour force. In June, this was as much as 4.9 percent.

This figure does not include all people without work who would like to work, or part-timers who want to work more hours. People who would like to work but have not actively sought employment recently and/or were not immediately available do not count towards ILO’s unemployment definition. CBS defines these groups on the basis of additional indicators. With regard to paid work (employed labour force), working hours are not taken into consideration. CBS publishes quarterly figures on the number of hours worked by people in paid employment.

In July, the number of current unemployment benefits decreased further. UWV reported a total number of 364 thousand benefits this month, i.e. a decrease of 8 thousand (-2.1 percent). The decline in number of benefits compared to June was sharper among men (-2.9 percent) than among women (-1.4 percent). The education sector recorded an increase in the number of unemployment benefits, i.e. 14.4 more than in June. Many temporary contracts of teachers expire at the end of the school year.

The number of benefits dropped substantially compared to July 2016 (-15.6 percent). Construction companies saw the sharpest decline relative to one year previously (-42.4 percent). However, the number of current unemployment benefits also declined in the education sector: 10.8 percent down from last year.

In the first seven months of 2017, UWV provided 241 thousand new unemployment benefits: a decline of 19.7 percent compared to the same period in 2016. In nearly all sectors, the number of new benefits decreased year-on-year. The drop was highest in the sector construction (-48.0 percent) and multiple stores (-46.4 percent). The banking sector shows a different trend: the number of new benefits was up by 19.8 percent in the first seven months of 2017.

Of the 12.9 million people aged 15 to 74 (in Q2), nearly 8.6 million people were in paid employment and 451 thousand were unemployed (ILO standard). These two groups together represent the labour force. The other part, nearly 3.9 million, is not included.
The majority of the latter group were not willing or not able to work (3.2 million), e.g. due to education or training, care for others, sickness or old age. In addition, there were over 200 thousand people who would like to work, but were not looking and not immediately available for work, for example people who follow a training course or do voluntary work. Furthermore, people either had looked for work (163 thousand) or were available for work (273 thousand). 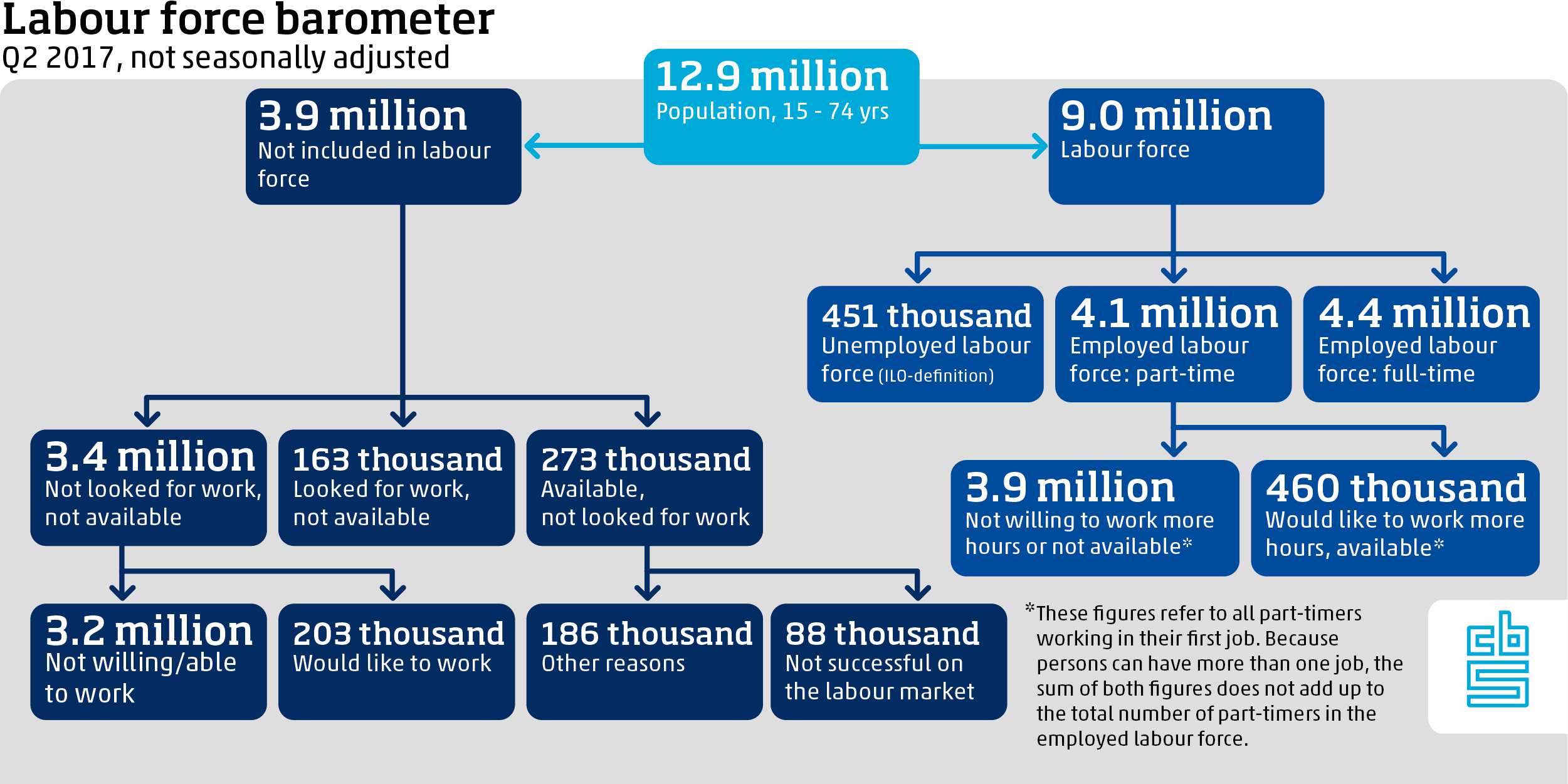 Out of the 4.1 million part-time workers, there were 460 thousand people in Q2 2017 who wanted to work more hours and were also available. The number of extra hours that people would like to work provides more insight into the unused labour potential. In 2016, the total number of extra hours that part-timers would like to work amounted to 6.4 million per week (12.6 hours per person per week).

Pesticide use in agriculture

Exports nearly 9 percent up in November

Mortality further down in week 1