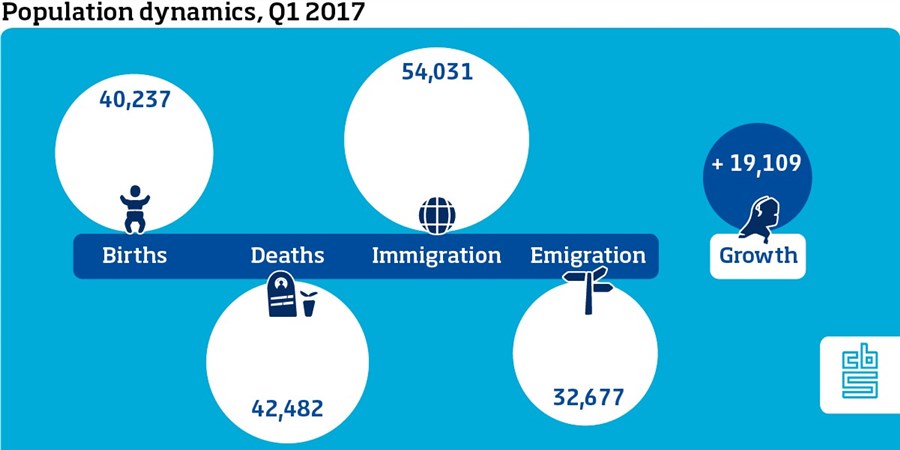 The population growth in Q1 was nearly 2.5 thousand below the level of the same period last year, but the growth rate is still high compared to previous years, mainly due to large foreign migration. During the first few months of 2017, 54 thousand individuals arrived in the Netherlands and 33 thousand left the country. The largest group of migrants were born in Syria (on balance over 6 thousand). With almost 2.5 thousand, the number of Polish immigrants also remains high.

Natural population growth has been fairly small in recent years. In fact, there was a decline in the first few months of 2017; 40 thousand babies were born, but more than 42 thousand people died.

The negative natural growth is related to a relatively high number of deaths, which was almost 3 thousand higher during the first ten weeks of 2017 than in the same period last year. The mortality rate was particularly high among older people, while the number of births was relatively low. Last year, the fertility rate per woman averaged 1.66 children, versus 1.77 less than a decade ago. Currently, women in their twenties have fewer children than ten years ago. If women gave birth to as many children as a decade ago, natural population growth would not have been negative at present.

As a result of population ageing, CBS anticipates to see more periods each year when deaths exceed births. However, according to the most recent population forecast, the point where natural growth turns into natural decline will not occur until 2038. From then onwards, the annual mortality rate will be higher than the annual birth rate.