In the past three months, unemployment was reduced further across all age groups. For the first time since August 2011, youth unemployment dipped below 10 percent. Unemployment was also reduced among 25 to 44-year-olds and over-45s to 4.1 and 4.8 percent respectively in January.

Simultaneously with the decline in unemployment the number of people with paid jobs grew, on average by 16 thousand a month during the last three months.

UWV reports that 419 thousand benefits were granted in January 2017, a 1.6 percent increase relative to December 2016. January’s increase is lower than in previous years. The strongest relative growth was seen in sectors showing a distinct seasonal pattern, e.g. construction, agriculture and temp agencies. The increase is mainly found among men and people younger than 35. This is because most people employed in these sectors are men.

Youth unemployment peaked in September 2013, when nearly 14 percent of young people in the labour force were unemployed. Subsequently, the rate dropped to 9.8 percent in January. The Netherlands has the lowest youth unemployment rate in Europe (EU 28) after Germany.

The number of young people in paid employment has risen by 42 thousand in the past twelve months. Nearly two-thirds have jobs of 12 hours a week or more. In January approximately 1.3 million young people had paid work.

The 15-74 age category in the Netherlands includes 12.8 million people, of whom 66.3 percent had paid jobs. This amounts to 8.5 million individuals; 4.6 million men and 3.9 million women. In the past three months, the number of people in paid employment has grown by an average of 16 thousand a month.

Among people aged 15 to 74 years, 4.3 million do not have paid jobs. In this age group 480 thousand are unemployed and 3.8 million are not looking for a job or not immediately available for the labour market. In the latter group, the majority are women (2.2 million). 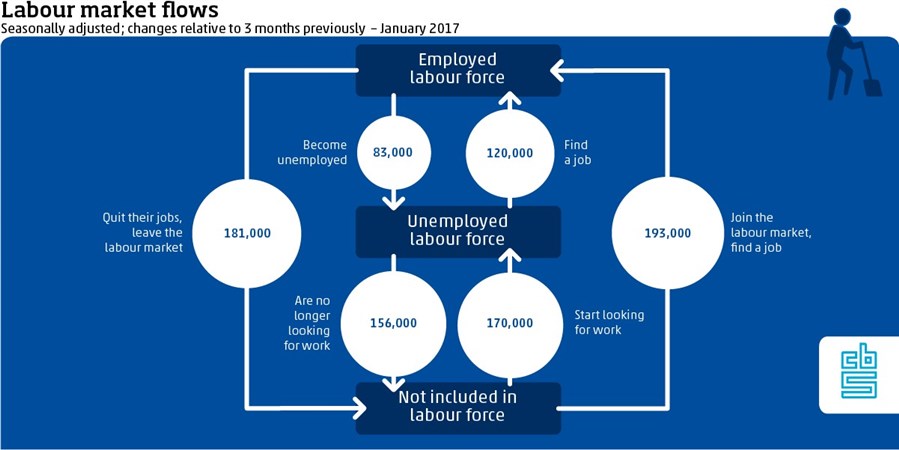 Investments almost 3 percent down in November