The Netherlands is the second largest exporter of agricultural goods after the United States. By far the most important sector for agricultural exports remains horticulture, which includes fresh flowers, plants, nursery products and flower bulbs. These are followed by meat, dairy products, eggs, vegetables and fruit.
Aside from primary and secondary agricultural goods, exports of advanced, knowledge-intensive agroproducts (tertiary agricultural goods) also rose in 2016. Including these technological exports, total agriculture-related exports amount to 94 billion euros.

The import value of primary and secondary agricultural goods rose more slowly (by 1.6 percent) than the export value and stands at 57.1 billion euros. The difference in development between import and export values can partly be attributed to price developments. Export prices saw a minor rise, while import prices fell slightly.
The trade balance in 2016 ends in a higher surplus than the previous year, with the surplus in agricultural goods trade rising by 2.7 billion euros to a total of 27.9 billion euros. This is equivalent to 55 percent of the total Dutch trade surplus.
Fruit and cocoa are the most important agricultural import products. Developments such as strong and weak harvests, expansion of crop areas and increased production elsewhere in the world all have a large impact on the values and international trade figures of the Netherlands.

The most important export products (both including and excluding re-exports) are horticulture, meat, dairy, eggs and vegetables. As fruit cultivation often takes place abroad, fruit is not a very prominent Dutch export product.

Dutch agricultural trade is mainly focused on neighbouring countries. Over 25 percent of agricultural exports go to Germany. The bulk of these sales to Germany includes potatoes, vegetables and fruit (18 percent), horticulture (12 percent) and cattle and meat (12 percent). The share of agricultural exports which is destined for the German market amounts to three-quarters for some products, for example table eggs and live pigs.
In 2016, the Netherlands imported a total value of 57.1 billion euros in agricultural products. With 10.7 billion euros (19 percent), Germany is the single most important country of origin supplying agricultural products to the Netherlands, followed at some distance by Belgium and France. 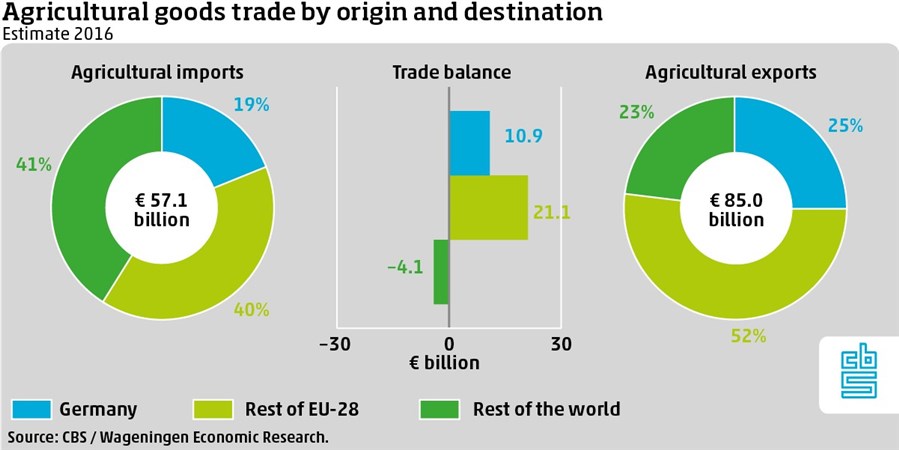 The Netherlands has a very strong position on the German market with agricultural imports occupying a share of 24 percent. This share rose slightly in 2016. France ranks second as country of origin for German agricultural imports, but its share remained the same relative to the previous year.