The report focuses on the four largest non-western groups (those with Turkish, Moroccan, Surinamese or Antillean background), as well as refugees and western origin groups from the new EU countries, in particular from Poland. 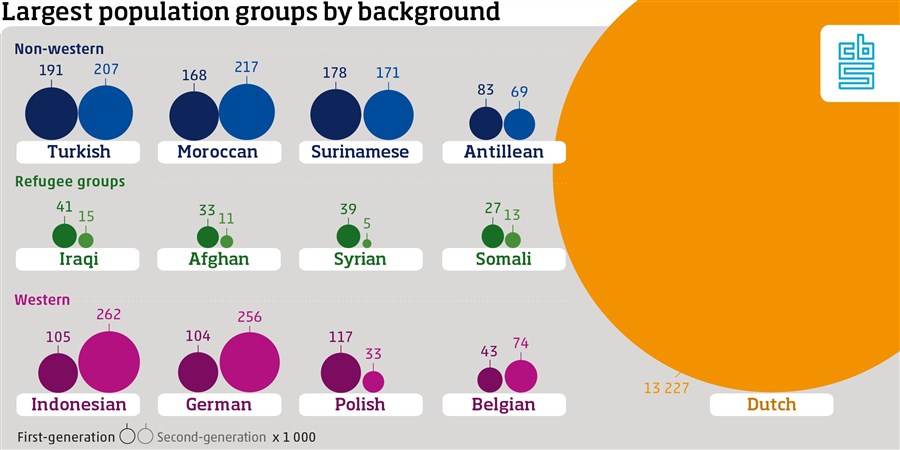 Most immigrants nowadays from Syria and Poland

In recent years, the four largest non-western groups have not or hardly grown due to migration, but solely due to second-generation births. The Turkish and Surinamese origin groups have even had negative net migration since 2012. Over the past few years, the majority of immigrants have come from Poland and more recently also from Syria.

Integration processes of the various origin groups in the Netherlands are currently in various stages. The Annual Report on Integration describes the present situation and the trend for various migrant groups. Topics covered include population, education, labour market, income, welfare benefits and registered crime. Below are some of the main findings:

- Scores at the ‘end of primary education’ test are lower among non-western Group 8 primary students than among native Dutch students. First-generation migrant children who came to the Netherlands prior to their sixth birthday do better than children who arrived later. Students in second-generation and third-generation groups achieve a higher score when one of the parents has a native Dutch background.
- Between 2009 and 2016, the labour participation rate among residents with a background from the four largest non-western origin groups has fallen more sharply than among native Dutch residents. This means recent economic conditions have had more implications for these groups. They are also relatively more likely to work under flexible employment contracts.
- Persons with a migration background are less likely to progress from the flexible layer on to permanent employment than those with a native Dutch background. People from the new EU countries have relatively more outflow towards unemployment without benefits than towards benefits.
- In some groups, the migration background remains visible into the third generation, for example in educational achievements. The third generation do not have a migration background, but one of the parents does.
- In 2016, the number of residents of Polish origin in the Netherlands exceeded 150 thousand for the first time. This is roughly the same number as residents with an Antillean background. A study has been conducted on Polish people who settled in 2013 and 2014: where they came from and where they settled. Settlement was mainly in the agricultural and horticultural regions where they found work. Among recently immigrated Poles, 71 percent had a job at the end of 2014 while 6 percent received an unemployment benefit.