In the accompanying vlog, these figures are further visualised and explained by Statistics Netherlands spokesperson Marjolijn Jaarsma. Use 'settings' for subtitles in English.

Germany is by far the most important destination for Dutch exports, but exports are unevenly distributed across the states. Seven of the sixteen federal states account for 91 percent of Dutch exports of goods to Germany, with North Rhine-Westphalia alone accounting for 43 percent, as registered by the statistical offices of the German federal states. The federal state of North Rhine-Westphalia has the largest economy of Germany, shares a border with the Netherlands and the river Rhine provides an excellent, navigable waterway between the two countries.
After North Rhine-Westphalia, Baden-Württemberg (15 percent of the total) and Bavaria (10 percent) are major export destinations for the Netherlands, followed by Lower Saxony, Hesse, Hamburg and Rhineland-Palatinate. Dutch exports to Mecklenburg-Vorpommern and Saarland (both accounting for 0.6 percent) are at the bottom of the list. 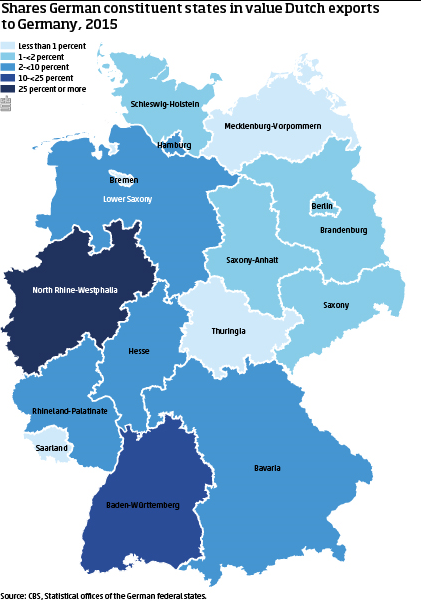 The fact that many goods exported to North Rhine-Westphalia are mainly carried over inland waterways has an effect on the type of goods. Nearly half (43 percent) of exports to North Rhine-Westphalia are mineral fuels, like petroleum derivatives. The same applies to goods exported to Hamburg. Six federal states mainly import food and natural products from the Netherlands and four mainly import chemical products. Dutch exports to Saxony, Berlin and Hesse predominantly include manufactured products and Dutch exports to Bavaria are dominated by machinery and transport equipment.

Exports of Dutch goods to Germany, 2015

The volume of Dutch exports to the German federal states is strongly related to the size of their economies and the geographical distance to the Netherlands. The value of actual exports to Germany (86.9 bn euros, according to German statistics) is almost equal to the anticipated figure, based on size of the economy and the geographical distance (86.6 bn euros).
Within Germany, however, there are differences. Exports to North Rhine-Westphalia and Baden-Württemberg are well above what can be expected on the basis of the size of their economies and the geographical distance. These states mainly import goods and the river Rhine provides an excellent alternative to other modes of transport, like roads, railroads and air. These states also ship goods to other regions. A major port, Hamburg also imports more goods from the Netherlands than should be expected. Bavarian imports comply with expectations, but Dutch exports to the other German states are lower than should be expected.

Actual and anticipated volume of Dutch exports to Germany, 2015