The Employee Insurance Agency (UWV) registered 469 thousand unemployment benefits in February, i.e. 1 percent more than in January 2016 and 3.1 percent more than in February 2015. The number of unemployment benefits paid in the retail chain store segment increased by nearly 29 percent compared to one month ago and by nearly 44 percent compared to twelve months ago. The sharp increase is partly caused by recent bankruptcies of retail chain stores (e.g. department store group V&D) at the beginning of this year. In various sectors, like education, the number of current benefits declined in February.

* Following the adoption of the Work and Security Act, a new classification method on the basis of income adjustment was introduced in July 2015, which structurally increased the number of current unemployment benefits; firstly, incomes of people working for low wages are supplemented under the Unemployment Act and secondly, their benefits can only be terminated if they receive sufficient income.

Fewer unemployed than three months ago, but more than in January

The 15 to 74-year-old population in the Netherlands includes 12.7 million people, of whom more than 8.3 million held paid jobs in February (4.5 million men plus 3.8 million women). On average during the past three months, more than 8 thousand people found work each month, a total of 25 thousand, among whom 20 thousand women. Compared to one year ago, employment among both genders rose by 26 thousand.

The other 4.4 million people in the age category 15-74 do not have paid jobs; 581 thousand unemployed and 3.8 million people who are not looking for jobs or are not immediately available for the labour market. With 2.2 million, women constitute the majority in the latter group.

Somebody is defined as unemployed if they have recently been looking for work and are available for the labour market at short notice, but the so-called unused labour potential is not identical to the unemployed labour force. For example, there are people who are only available for the labour market or have only been looking for work. Last year this group included more than half a million individuals. Another seven percent of employed are available for more working hours (over one million people). 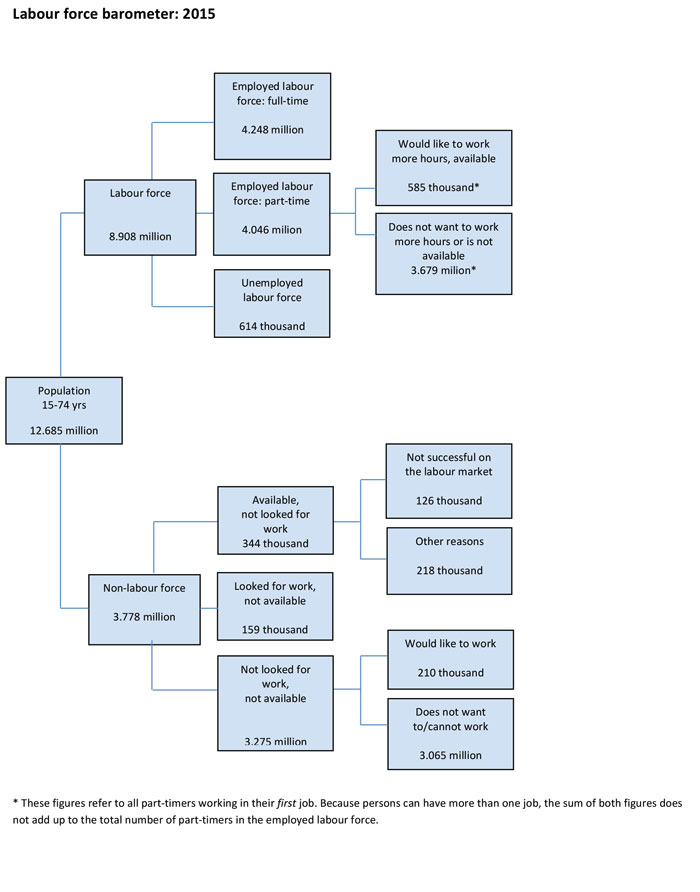 Export position of the Netherlands

Green electricity production up by 40 percent

Mortality further down, number of deaths in week 6 as expected