Data available from: first quarter of 2006.

Status of the figures:
Annual and quarterly data are provisional.

When will new figures be published?
New data are published within 120 days after the end of each quarter. The first quarter may be revised in October, the second quarter in January. Quarterly data for the previous three quarters are adjusted along when the fourth quarter figures are published in April. This corresponds with the first estimate of the annual data for the previous year. The annual and quarterly data for the last three years are revised together with the publication of the first quarter in July.

Sources:
The value of world exports is based on data from the International Monetary Fund (IMF). IMF data are available only on an annual basis; quarterly data are based on an interpolation using both the world export volume index and the world export price index in dollars from the world trade monitor of the Netherlands Bureau for Economic Policy Analysis and euro-dollar exchange rate figures from the Dutch central bank (DNB).

Calculation of the scoreboard indicator:
Exports of goods and services are calculated as a percentage of world exports.

Interpretation of the indicator:
Exports of goods and services are a source of income for a country. A change in a country's share in world exports indicates a change in its relative competitiveness on the world market.

Upper and lower limits:
For this indicator, the European Commission has set only a lower limit for the change on five years previously: - 6 percent. 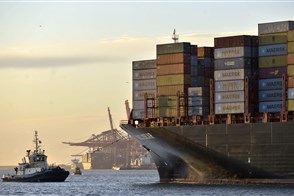