This table provides information about the land use of the area of the Netherlands and the changes in land use.

When will new figures be published?
The land use 2017 figures will be published December 2021 at the latest.

Total surface
Total surface of the Netherlands.
Transport
Area in use for traffic and transport on roads, on railways and in the air.

Railroad
Area in use for traffic and transport on railways.

Excluding
- narrow gauge, this is included at the adjacent land use.

If residential areas are inside woodland, the total area is assignated as residential if a street pattern can be recognized.

Building site
Area in use for construction.

including
- area of construction or with preparing traces;
- fallow land on industrial- and office areas.

Recreation
Area in use for recreation.

Sport grounds
Area in use for sport activities.

Greenhouses
Area in use for agriculture in greenhouses.

Including
- area of the cultivation of plants under glass in greenhouses;
- associated waterbasins.

Woodland and nature
Area with forest or natural open area.

Woodland
Area with trees for wood production and nature conservation.

Including
- area with trees of which the crowns are a closed entity;
- cutting field;
- fire lane;
- forest path;
- nursery of forests;
- storage of wood;
- scattered houses, if placed inside the woodland;
- poplar fields. 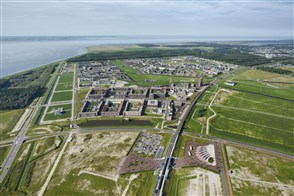 400 thousand inhabitants in the IJsselmeerpolders