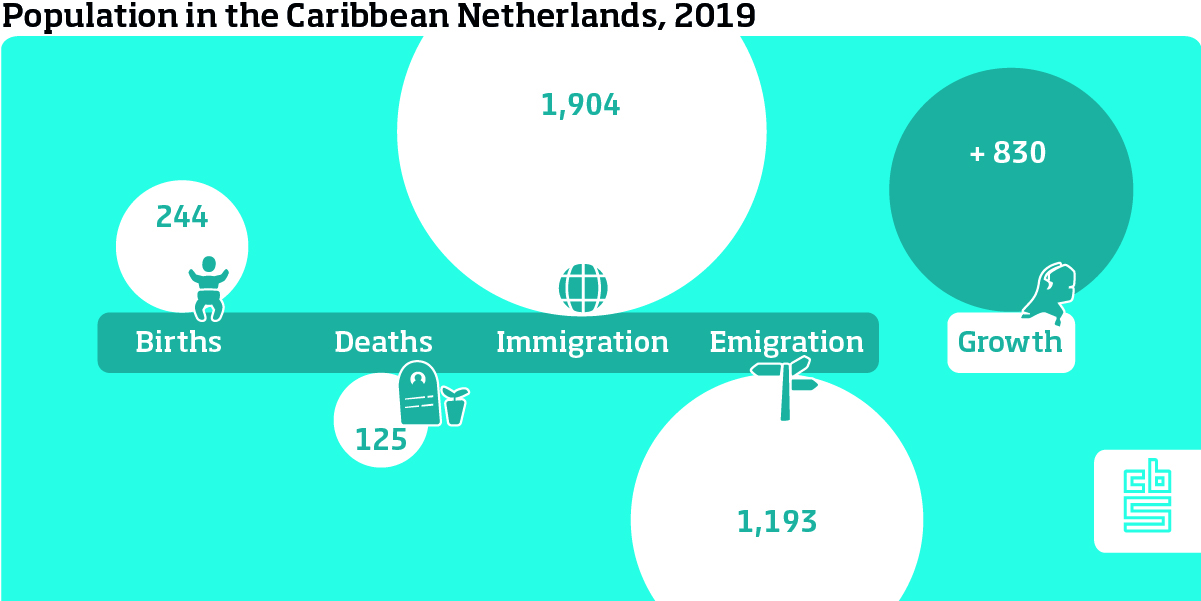 On 1 January 2020, Bonaire had 20.9 thousand inhabitants. This is an increase of 811 persons (4 percent) relative to one year previously. Most (87 percent) of this growth can be attributed to positive net migration: more people migrated to Bonaire (nearly 1.5 thousand) than left the island (770). The balance of births and deaths amounted to 106 (203 live births minus 97 deaths), contributing 13 percent to the island’s population increase.

On balance, the majority of migrants were from Curaçao, followed at a great distance by the Dominican Republic, Venezuela, Peru, the (European) Netherlands and the United States. In 2019, the number of people trading Curaçao for Bonaire was considerably higher than in the previous year. There were also more people from the Dominican Republic arriving on the island. Migration from Venezuela, on the other hand, declined. As of the beginning of 2019, it is no longer possible to move directly from Venezuela to Bonaire. 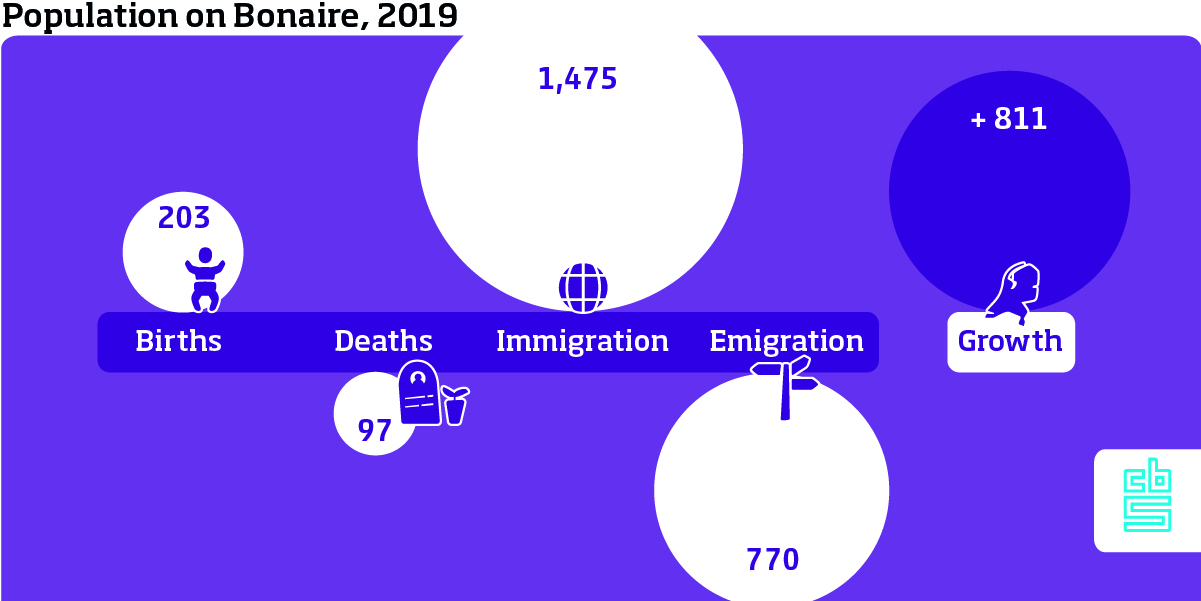 At 3.1 thousand, the number of inhabitants on St Eustatius on 1 January 2020 was virtually the same as one year previously. The balance of births and deaths was slightly positive (30 versus 15). Net migration was negative: 201 immigrants settled on St Eustatius, while 215 emigrants left the island last year.

On balance, more people came to St Eustatius from the Dominican Republic and from Colombia than vice versa. The same held true for the (European) Netherlands; by contrast, in 2018 more people moved from St Eustatius to the Netherlands on balance. This was when a clean-up of Statia’s population register took place, which then caused a downward adjustment of the number of inhabitants. There was no such clean-up in 2019. It is also noteworthy that the number of persons moved on St Eustatius almost doubled last year. This is related to population registry with visits to people’s home address to check who actually lives there. This has resulted in corrections and an improved population register. 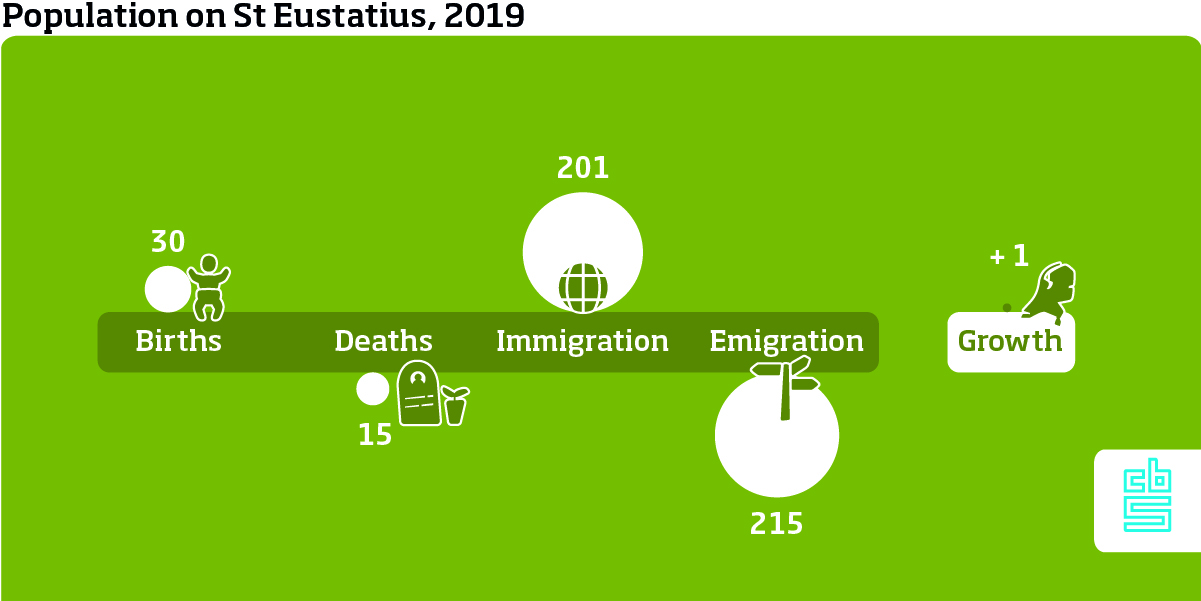 At the beginning of 2020, Saba had 1.9 thousand inhabitants, 18 more (1 percent) than one year previously. With 11 live births and 13 deaths, natural population growth was negative. The small population growth was on account of a positive migration balance (20); the main reason was that, on balance, slightly more people from the United States and the Dominican Republic settled on Saba. Conversely, migration from Saba to the European Netherlands was higher than vice versa.

In 2018, there was still a decline in the number of residents on Saba due to a clean-up of the population register. During this process, persons who were still registered but in reality had already left the island were removed from the population register. In 2018, this led to a decline in the number of US and Canadian nationals registered on Saba. There was no such clean-up in 2019. 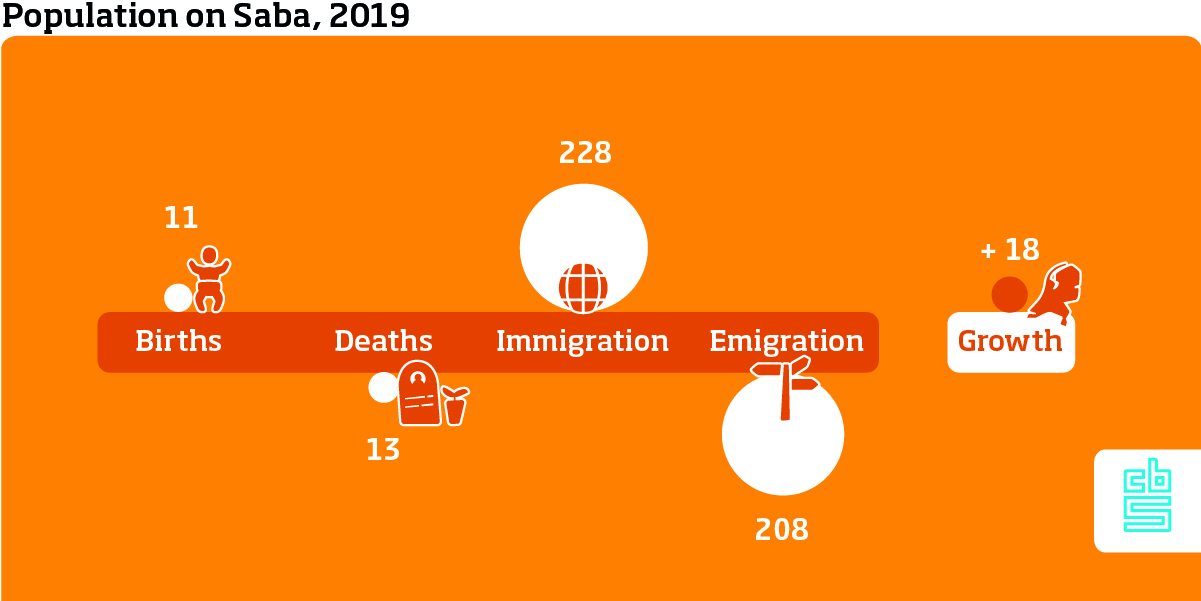