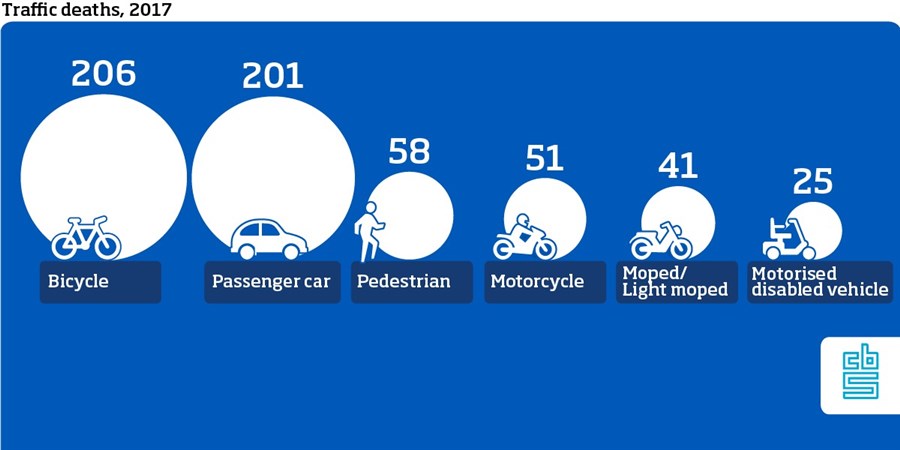 Last year, 206 cyclists were killed in traffic accidents, 17 more than in 2016 and the highest number in 10 years. In the same year, 201 passenger car occupants lost their lives on the road, down by 30 relative to 2016. For the first time, the death toll was higher among cyclists than car occupants. In addition, traffic deaths included 58 pedestrians, 51 motorcyclists, 41 moped and light-moped riders and 25 mobility scooter riders.

Please note: the figure above shows traffic deaths among cyclists per 100 thousand inhabitants and the cycling distance per person per day.

Number of bicycle deaths among men on e-bikes almost doubled

Most fatal bicycle accidents per kilometre in Zeeland

In the province of Noord-Brabant, 35 people were killed in bicycle accidents in 2017, the highest number of all provinces. Gelderland also saw a high number of cycling deaths. Flevoland and Drenthe held the lowest shares in this respect, but a shorter distance was covered by bicycle. Zeeland and Overijssel have the highest shares of bicycle deaths per kilometre, while Drenthe and Groningen occupy the lowest shares.

Reduction in traffic deaths among young and old drivers

Rise in traffic deaths in Zuid-Holland