The SDGs constitute a future agenda for sustainable development in the period 2015-2030 which was adopted by the entire membership of the United Nations at the end of 2015. This included an international system of indicators to measure how countries are progressing on that agenda. The first measurement for the Netherlands was published by CBS in November 2016.

For most SDG indicators, the Netherlands shows positive development. In particular, sometimes modest but still positive achievements have been made in decent work and economic growth (SDG 8), responsible consumption and production (SDG 12) and peace, justice and strong institutions (SDG 16). There is a relatively higher proportion of negative developments in no poverty (SDG 1) and reduced inequalities (SDG 10).

Compared to the rest of the EU, the Netherlands is particularly strong in economic governance, rule of law and institutions, as well as in some areas of education and health. Its GDP per capita is one of the highest in Europe. The risk of poverty is still low by international comparison despite the rise seen in 2016. School drop-out and teenage pregnancy rates are the lowest in the EU. Of all generated waste, nearly 82 percent is recycled, putting the Netherlands in third place within the EU. Furthermore, the share of female Members of Parliament and local politicians is relatively high at 38 percent. 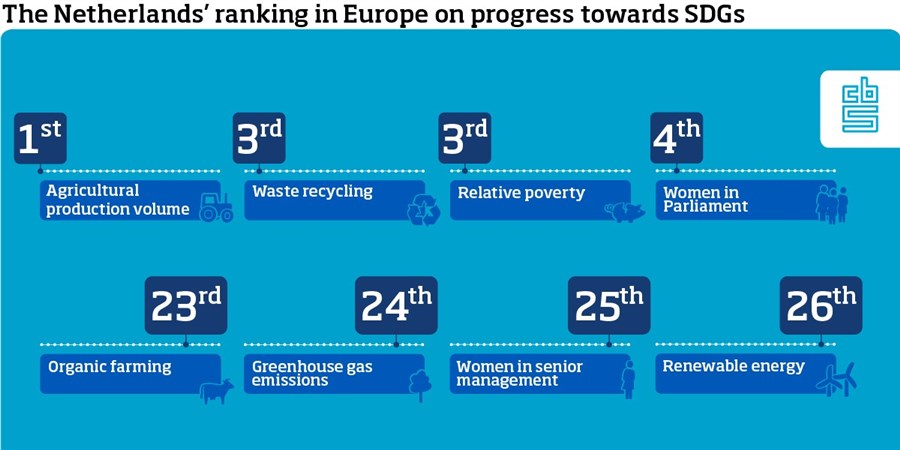 The Netherlands shows a somewhat weaker performance on indicators relating to environment, climate, energy and inequality. For example, it has had a bottom ranking in renewable energy for years (26th place out of the 28). In addition, greenhouse gas emissions per inhabitant are unabatedly high in comparison with other EU countries. Other areas of concern are found in the Netherlands’ land use. For instance, the small area of woodland may be a given, but in terms of the share of organic farming the Netherlands shows a relatively poor performance. The percentage of women in leadership positions stood at 26 in 2015, ranking the country 25th among the EU-28. The standard set in the Rutte II coalition agreement of 30 percent has thus not been met.

Aside from similar indicators which affirm each other, there are others which reveal interesting and sometimes remarkable discrepancies. For example, the Netherlands combines a relatively low position in terms of women in leadership positions with a relatively high ranking as far as women in positions of popular representation within public administration are concerned. Furthermore, agricultural productivity is high (the highest in the EU), but on the other hand the share of organic farming is relatively low compared to the rest of Europe.

The greenhouse gas intensity of the Dutch economy has declined in recent years, although this decline has been less steep compared to the average across the EU. As a result, the Netherlands has dropped out of the lead (6th in 2008) and moved to the middle of the rankings (13th in 2015).

At the end of 2015, the entire membership of the United Nations adopted an agenda for sustainable development for the period 2015-2030. This agenda consists of 17 sustainable development goals (SDGs), elaborated in 169 sub-goals (https://unstats.un.org/sdgs) The SDGs are regarded worldwide as the most important policy issues for the period up to 2030 inclusive. Statistics Netherlands has just published a second measurement of national progress on these sustainability targets. 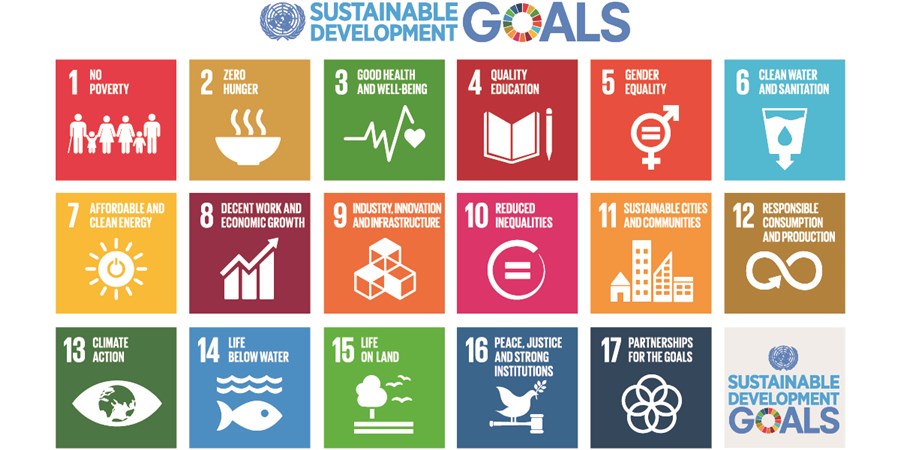 Statistics Netherlands’ latest SDG publication contains just over half of the 17 indicators specified by the UN. This is a significant improvement relative to the initial report. The additional data became available through consultations with over 30 different Dutch organisations including ministries, planning agencies, knowledge institutes as well as various sectors of civil society.  Moreover, these consultations yielded input that could be used towards improving the already existing indicators. These insights have been incorporated in the second edition of the SDG monitor.

The Dutch Cabinet has also commissioned Statistics Netherlands to compile the first edition of a Monitor on Well-being. This monitor will be released on ‘Accountability Day’ (this year on 16 May). Together with a response from the Cabinet, it will also be included among reports to be discussed in the Accountability Debate at the Dutch House of Representatives. The Monitor of Well-being will focus on the SDGs as well, but from a broader perspective.