2017 was the third consecutive year in which the number of employed was up compared to the previous year. The average growth rate was also higher than in 2015 and 2016. Aside from this year-on-year increase in employment over three consecutive years, the number of unemployed has dropped for the same number of years. The average rate at which unemployment declined was also higher in 2017 than in the two preceding years.

In December 2017, the total number of people in paid employment came close to 8.7 million. Over the previous three months, the number had increased by an average 9 thousand per month. In December, slightly under 4.3 million people were not employed for various reasons. This included 395 thousand people who indicated they had recently looked and had been immediately available for work. According to the ILO definition, these are the unemployed. Their number fell by an average 9 thousand per month over the previous three months.
Another group who were not in employment (nearly 3.9 million) had not looked recently and/or were not immediately available for work. Their number rose by an average 7 thousand per month. 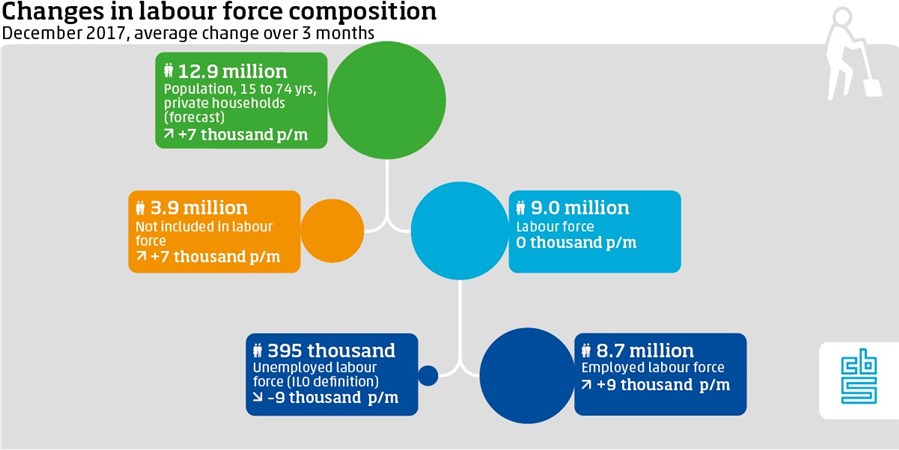 In order to enable comparison of cyclical developments in the labour market between countries, the unemployment indicator of the International Labour Organisation (ILO) is often taken as a measure. According to this indicator, the ‘unemployed’ includes all 15 to 74-year-olds who do not have paid work but who are actively looking and immediately available for paid work. Unemployment has been declining since the beginning of 2014. In December there were still 395 thousand unemployed, equivalent to 4.4 percent of the labour force. This unemployment rate was the same in November. In December 2008 - when the economic crisis started - this stood at 3.7 percent.

UWV: Number of WW benefits dropped by 20 percent over 2017

UWV: Sharp fall in number of new benefits as well

These groups are reported on every quarter in terms of their size and composition. An overall picture as presented below is therefore based on the latest quarterly figures (Q3 2017). Q4 figures will e released on 14 February 2018. Developments in the total unused labour potential are closely linked to developments in unemployment according to the ILO definition. 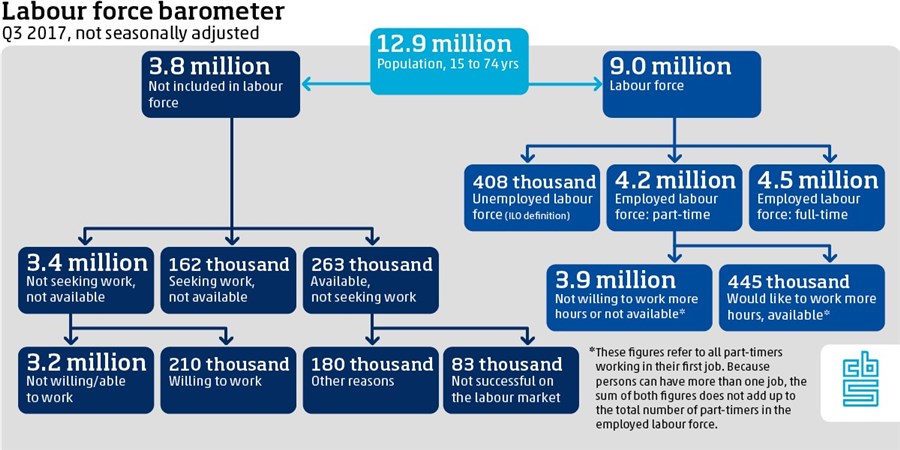