The other people without work, over 3.8 million, had not been looking for work and/or were not available recently. Their number fell by an average of 6 thousand per month. The Employee Insurance Agency (UWV) reported a further decrease in unemployment (WW) benefits to a total of 351 thousand in September. 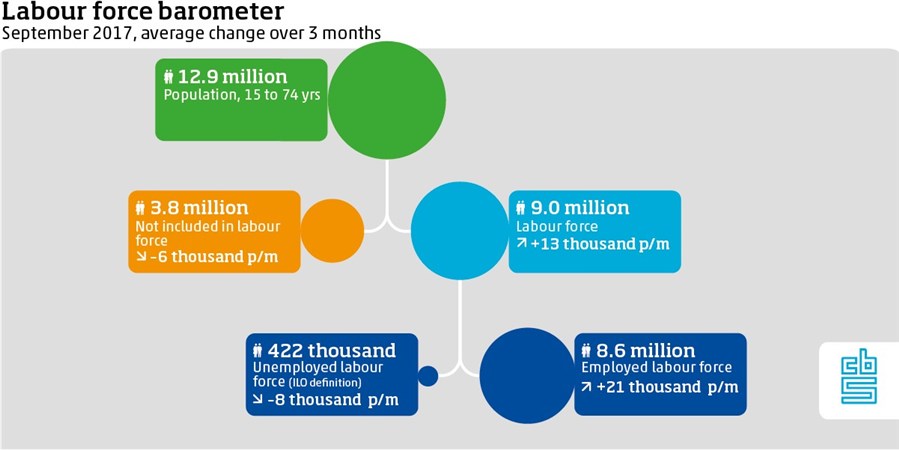 To be able to compare cyclical developments in the labour market between countries, the unemployment indicator of the International Labour Organization (ILO) is often taken as a measure. According to ILO’s definition, the group of unemployed people includes all 15 to 74-year-olds who are without paid work but are actively looking and are immediately available. As indicated above, this number stood at 422 thousand in September, i.e. 4.7 percent of the labour force. In June, this was as much as 4.9 percent.

This figure does not include all people without work who would like to work. People who do want to work but who have not sought work recently for any particular reason, and/or have not been immediately available, do not count towards ILO’s unemployment definition. Likewise, part-timers who want to work more hours are not included. CBS describes these groups on a quarterly basis. Furthermore, the number of hours worked by people in paid employment is reported quarterly. The monthly figures on people in paid employment (the active labour force) include all people in work, regardless of the number of hours worked.

In September, the number of current unemployment (WW) benefits decreased by more than 11 thousand. The total number of WW benefits at the end of September stood at 351 thousand. A decline was seen among construction workers and drivers in particular. Relative to September 2016 (one year previously), the number of WW benefits dropped by 17.3 percent. The year-on-year decline is especially strong in the sectors construction (-41.4 percent) and temporary agencies (-28.2 percent).

In the period January to September 2017, UWV provided 301 thousand new unemployment benefits: a decline of 20 percent compared to the same period in 2016. The decline is seen across all sectors. The drop was sharpest in the sectors care (-38 percent), construction (-37 percent) and for drivers (-30 percent). In addition, the number of new benefits also declined in nearly all sectors except for banks, where it rose by 14 percent year-on-year.

Every month, CBS publishes figures on the total (employed and unemployed) labour force as well as the number of people not in the labour force (ILO definition). However, this does not include the total unused labour potential, i.e. other groups of people aside from the unemployed according to the ILO indicator. CBS publishes quarterly on the size of these groups. Therefore, the overall picture provided below is based on the latest quarterly figures. Development of the total unused labour potential closely follows developments in unemployment according to the ILO definition.

Of the 12.9 million people aged 15 to 74 years (in Q2), nearly 8.6 million were in paid employment and on average 451 thousand were unemployed (according to the ILO standard). These included 172 thousand people who had been seeking work for at least twelve months. Almost two in three were aged 45 years or older. The groups of employed and unemployed combined represent the Dutch labour force.

The other part, nearly 3.9 million, is not included. The majority of the latter group were not willing or not able to work (3.2 million), e.g. due to education or training, care for others, sickness or old age. In addition, there were over 200 thousand people who were willing to work in Q2, but who were not looking and not immediately available for work; for example, people who were in education or training. Furthermore, there were people either looking (163 thousand) or immediately available (273 thousand) for work. 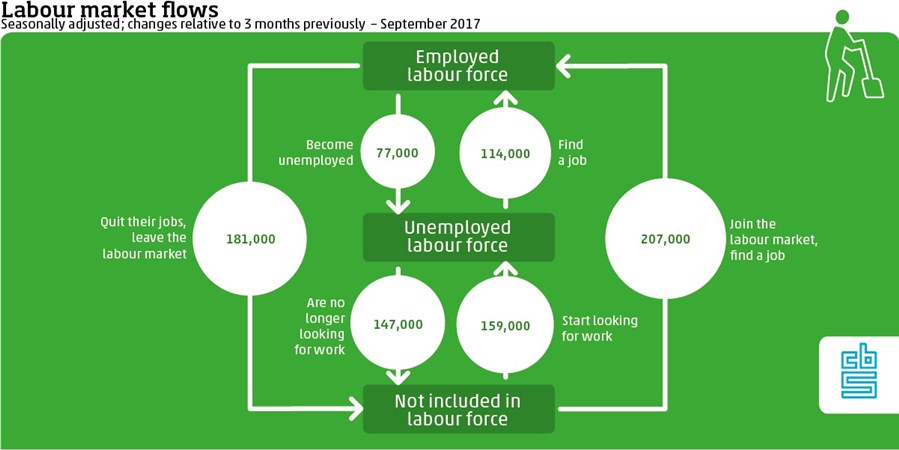 Unused labour potential does not only comprise people without work. Among the 4.1 million people working part-time, 460 thousand were seeking more working hours in Q2, who were also immediately available for more hours. On average, they wish to work an extra 12.6 hours per week.

The Netherlands in numbers 2021