The SDGs cover many areas with various sub targets, including promoting equal distribution of wealth, combatting climate change, stimulating clean energy and strengthening the rule of law and security. Within each SDG, some issues are handled more successfully than others. The picture can vary for each indicator. 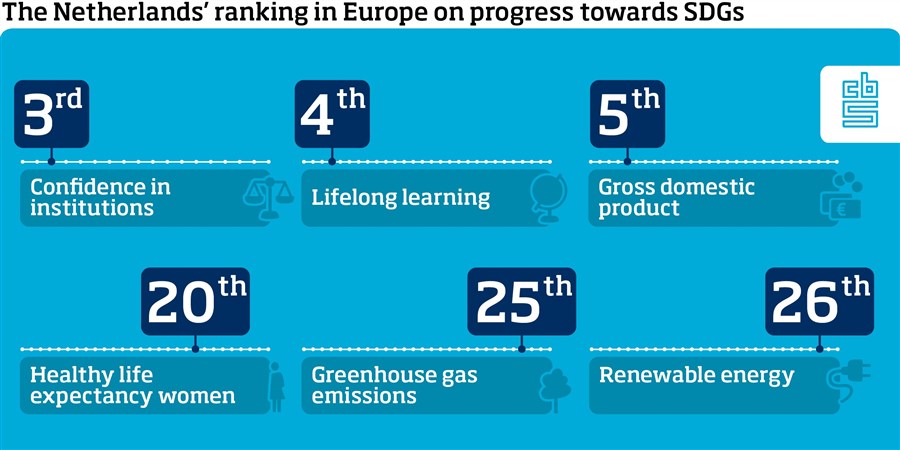 What is going well?


What is going less well?

In other areas, e.g. climate protection, renewable energy and economic and social inequality, the Netherlands performs less well. The greenhouse gas emission rate per capita is relatively high putting the Netherlands in place 25 on the EU ranking list in 2014. The amount of renewable energy annually used in the Netherlands is very small; only 5.9 percent of total energy consumption in 2015 (26th of the 28 EU countries). Healthy life expectancy for Dutch women is also relatively low in the EU (20th among the 28 EU member states in 2014); Dutch men are in the middle bracket (12th place).

The main reason for drawing up this inventory - which only takes EU countries into account - is the UN publication of a list of preliminary indicators to monitor various sub targets of the SDGs. Currently, only one-third of SDG target indicators for the Netherlands can be measured directly. Furthermore, various additional and alternative indicators have been applied. Many SDG indicators are still in the process of being developed, a major challenge. For many (sub) targets, national ambitions and goals have as yet not been formulated. They will affect the choice of which indicators will be developed first.