Skip to main content
Out of all Dutch agricultural goods imported by Germany, more than one-third (5.5 billion euros) were destined for North Rhine-Westphalia. This was followed by Lower Saxony (2.1 billion), Baden-Württemberg (1.7 billion), Bavaria (1.3 billion) and Hamburg (0.7 billion). 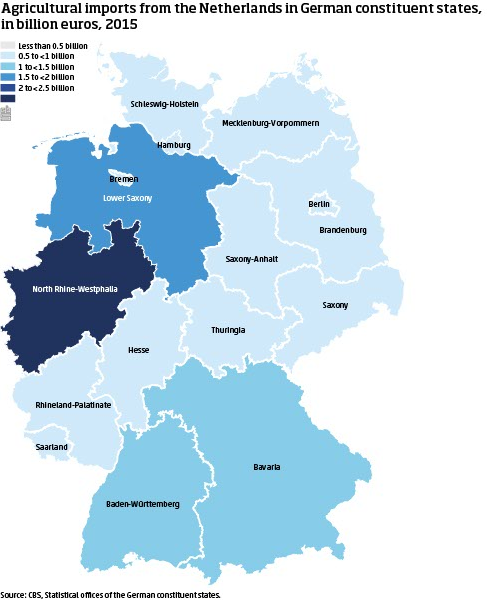 The number one import products from the Netherlands to Germany are flowers and plants (2 bn euros). In second place are vegetables (1.7 bn euros), followed by cheese (0.9 bn euros), cattle feed (0.9 bn euros) and live animals (0.8 bn euros).
Flowers and plants are not only the largest product group, but the strongest growth was from this group as well: +265 million euros. This is closely followed by vegetables (+ 258 million) and fruit (+ 214 million). Imports of processed foods such as baby milkpowder and ketchup (+ 137 million) and cheese (+ 135 million) also grew significantly.

Trends in the Caribbean Netherlands 2020

Dashboard ‘Well-being in times of coronavirus’

The labour market in a nutshell

Bankruptcies during the coronavirus crisis

Mortality up in week 42