Unemployed and benefits, monthly figures up to July 2016 inclusive

In the first seven months of this year, UWV paid out 300 thousand new unemployment benefits. This is 50 thousand fewer (-14 percent) than in the same period in 2015. For people aged 55 and above, the decrease was smaller (-8 percent). The number of benefits fell across all sectors of industry except wholesale trade. The drop was relatively most significant in the sectors construction, health care and welfare, the printing industry and temporary employment agencies.

UWV: further decline in benefits, but rise in education sector

Sharpest drop in percentage of unemployed people aged 45 or over

The total number of unemployed fell from 572 thousand in April to 541 thousand in July, i.e. the unemployment rate dropped from 6.4 to 6.0. The decrease was seen among all age groups, in particular in the group aged 45 and over. For young people up to age 24, unemployment fell during these three months from 11.2 percent (April) to 10.8 percent (July); among the 25 to 45-year-olds, from 4.8 percent to 4.7 percent, and among the over-45s, from 6.1 percent to 5.6 percent. Total unemployment has declined since early 2014.

The Netherlands has 12.8 million inhabitants aged 15 to 74. In July, 65.9 percent of them had paid employment. This amounts to over 8.4 million people, including approximately 4.5 million men and 3.9 million women. Since the beginning of the year, the number of people with paid jobs has gone up by 95 thousand. The rise was sharper among women than among men.
The remainder of nearly 4.4 million people aged 15 to 74 do not have paid employment. Among them are 541 thousand unemployed and 3.8 million inactive people who are not looking or not immediately available for work. The latter group largely consists of women (2.2 million).

The number of unemployed who find paid employment is larger than the number of working people becoming unemployed. Nevertheless, the decline in unemployment has levelled of somewhat over the past six months, as more people started looking for work who did not immediately find a job. 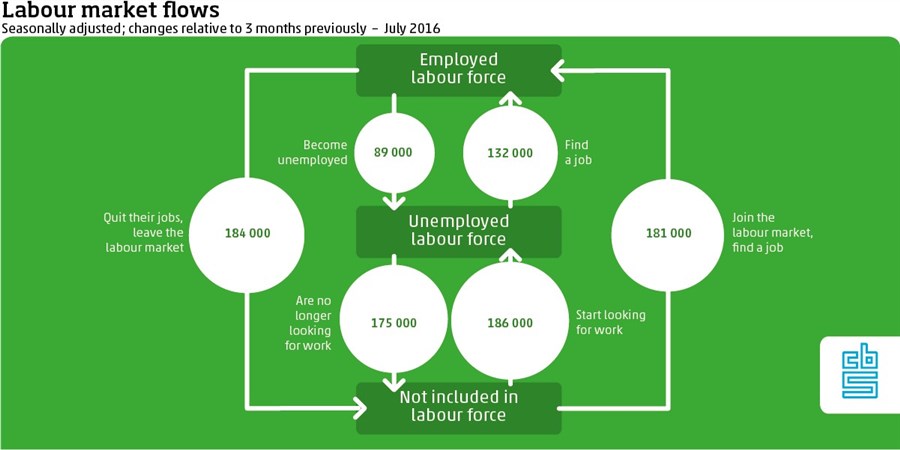