Statistics Netherlands (CBS) has been voted Best Government Organisation of the Year 2015. Dutch Minister of Education, Culture and Science  Jet Bussemaker announced this last night on behalf of the Association for Government Management (VOM) at the Knights’ Hall in The Hague.

Altogether, 216 Dutch government organisations participated in the contest. After a preselection by the organisation, the jury evaluated the ten best entries on the basis of ten criteria, including reliability, professionalism and openness. The jury selected three finalists: Avri, FIOD and CBS. After paying working visits, the jury selected CBS as the winner last night. The jury report expressed appreciation for the way in which CBS reaches out to society and the expertise present in the CBS organisation.

CBS director general dr Tjark Tjin-A-Tsoi: 'I consider it an honour for CBS to receive this award. It will motivate us to continue innovating our methods of data collection and data processing while making our information more widely available to society.' 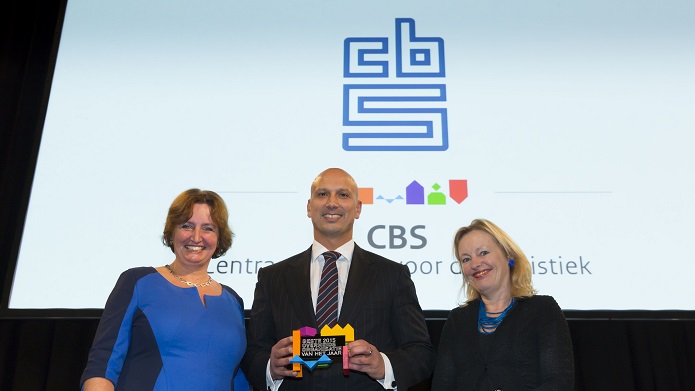 About the awarding contest Best Government Organisation of the Year 2015

Best Government Organisation of the Year is an initiative by the Association for Government Management, in cooperation with the Union of District Waterboards, the Association for Public Administration, the Interprovincial Consultative Body, the Home Department, ICTU, the Association of Dutch Municipalities and the Quality Institute Dutch Municipalities. With the contest, the organisation seeks to improve transparency and knowledge-sharing within the public administration sector by supporting good initiatives and improving the performance of public bodies.

The jury includes the following persons:

Former winners of the title Best Government Organisation of the Year are the Dutch Agency for the Protection of Juveniles Amsterdam Region (2014) and the municipality of Deurne (2013).

EU webshop sales nearly 20 percent up in the Netherlands

Dutch Trade in Facts and Figures 2019

How many asylum seekers and following relatives arrived in 2019? Available under embargo

Annual figures over 2019. How many flights arrived at and departed from Dutch airports? What were the main destinations? Regional classification Overig Available under embargo