Since data were compiled based on various statistics, in which there may have been slight adjustments, the figures may show minor deviations from the results published previously.

Figures on goods transport on Dutch roads by foreign vehicles are based on Eurostat data. Figures over the 4th quarter of 2020 on foreign road transporters from the United Kingdom have been estimated based on the data over the first three quarters.

Figures on maritime transport up to and including 2010 are based on gross-gross weight. As of 2011, this is gross weight, i.e. excluding the tare weight of the transport unit (e.g. containers).

When will new figures be published?
New figures will become available in the third quarter following the end of the previous calendar year.

This concerns goods transport with both Dutch and foreign means of transport in relation to the Dutch territory with a loading or unloading place in the Netherlands.

Cross-border goods transport does not include transport by Dutch vehicles that takes place entirely abroad (cabotage transport and cross-trade transport).

Cross-border goods transport does not include transport by Dutch vehicles that takes place entirely abroad (cabotage transport and cross-trade transport). 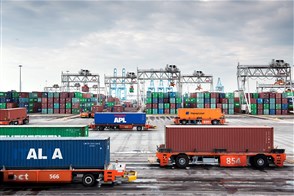 More road and maritime transport in 2018