This table contains information about Dutch residents who died in the given year due to an accident (mainly traffic accidents, accidental falls, drowning or poisoning). The accident may have taken place abroad and/or in the previous year, the date and place of death is the criterion. The data is split by sex and age of the victim. The ICD-10 codes that belong to accidents are V01-W77, W80-X59, Y10-Y19, Y34 and Y85-Y86.

Since 2013 Statistics Netherlands is using IRIS for automatic coding for cause of death. This improved the international comparison of the data. The change in coding did cause a considerable shift in the statistic. Since 2013 the (yearly) ICD-10 updates are applied. For accidents no changes in coding have taken place however.

The persons who died in the MH17 crash in 2014 are not categorized as an accident with an airplane, but as an operation of war (ICD-10 code Y36). These persons are not part of this accidents table.

Status of the figures:
All figures are final.

Changes as of November 20th 2019:
This table is stopped. All information can be found in the table 'Deaths; cause of death (extensive list), age and sex' and a great part of it in the table 'Deaths; underlying cause of death (shortlist), sex, age'. The fact that on two points the information is shown in a slightly different way has led to confusion and questions throughout the years. This is why the table has been discontinued.
Differences between the discontinued table and the 'short list table' are:
- The short list shows accidental poisoning not including intent unknown;
- The short list shows suffocation including inhalation and ingestion of food causing obstruction to respiratory tract, while this is not shown in the discontinued table.
In paragraph 3 there is a list of links through which substituting information can be found.

When will new figures be published:
Does not apply.

Fatal accidents (number)
Every death due to an accident, like a road accident, fall, drowning or poisoning. The accident might have taken place abroad. Euthanasia and violence like murder, manslaughter and suicide are not considered accidents and not counted in this table. Also complications of medical treatments, choking on food and legal intervention are not counted in this table.

Mopeds and light mopeds
ICD10 codes: V20-V29, plus the indication that the device is a moped or a light moped.

Motorcycle
ICD10 codes: V20-V29, plus the indication that the device is a motorcycle.

People who died of an ‘accident not on a public road’ are counted with ‘other and unknown way of participation of the victim’.

Other fatal accidents
These are the accidents not falling within one of the other categories. Accidents with unknown circumstances are included is this category. The largest group are the sequelae of an accident.

Cause other fatal accidents

Mechanical effect
Effects of mechanical impact, not caused by living creatures. This includes for example being trapped between or hit by objects.

Smoke, fire and flames
Death by accident after exposure to smoke, fire or flames.

Other, including sequelae
Accidents with unknown circumstances are included in this category.
The largest group is formed by the sequelae of an accident. Sequelae is when a person dies 30 or more days after the accident. 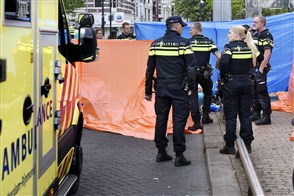