In his lecture Pijpers noted that the work of national statistical institutes was currently limited to describing the characteristics of groups of individuals or companies. ‘To gain a proper understanding of why certain things happen, it’s much more useful to look at the interrelationships and interactions among individuals and companies. Who do they know and who do they trade with? Detailed mapping of these factors allows better predictions of the potential consequences of events, which is particularly important for an open economy like the Netherlands. Having a clear view of interrelationships and interactions between companies means we can better predict the impact that events abroad will have on the Dutch economy, for example. The mathematics of complex systems is essential in order to visualise all this.’ Pijpers cites Brexit as an example. The professor also refers to the recent blocking of the Suez Canal by the Ever Given, one of the largest container ships in the world. ‘An event like that triggers a cascade of effects. But what are these precisely and what impact will they have?’ 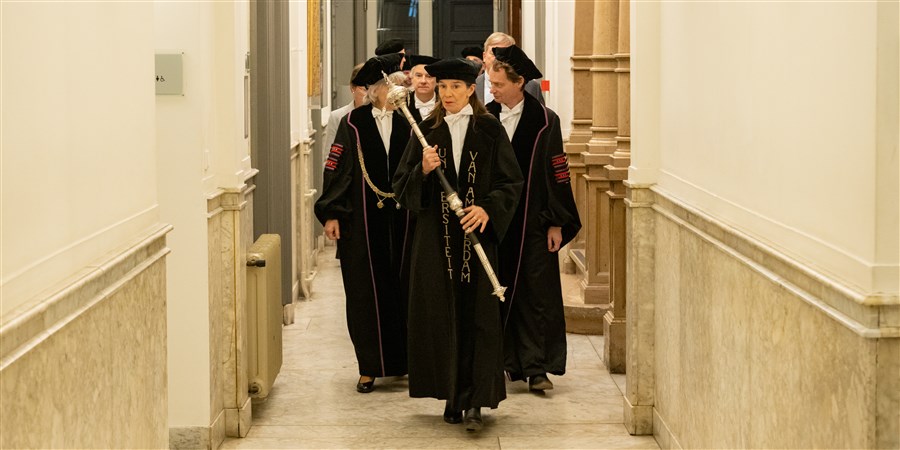 Just as predictions can be improved by a proper understanding of networks, relationships and interactions among companies, the same is also true in the personal sphere. Pijpers explains: ‘Who do people know, where do they live and what kind of relationships do they have with each other? Are they in family or business relationships, for example? A clear picture of these relationships enables predictions to be made about certain groups’ resilience, for example to poverty or social isolation. If someone is part of a subgroup made up entirely of poor people, for example, that person may only have a slim chance of escaping poverty.’ Pijpers therefore believes problems of inequality can be better understood by applying the mathematics of complex systems and he cites polarisation and segregation as examples. ‘If particular subgroups are very inwardly focused, they receive scarcely any different information and the result is polarisation. You can therefore learn a lot about the resilience of society by carefully analysing the characteristics of different networks.’

Pijpers notes that a lot of data on individuals are already available, if only in anonymised form. ‘Statistics Netherlands (CBS) has been collecting these date as part of the national statistics. The position with regard to companies is somewhat more complex. It’s difficult to gain a picture of companies’ relationships and interactions at the micro level. Although we have data from the commercial register and from surveys of major firms, for example, it’s on a different scale than the data available on individuals. We therefore use mathematical techniques to gauge the likelihood of certain trading relationships.’ Pijpers explains this using an example. ‘If you know that companies selling a similar range of products, such as screws, mainly supply to DIY stores, that’s useful for determining the likelihood that a company with that same characteristic will also supply to DIY stores.’

Mathematical techniques are applied using existing algorithms. ‘A team of Master’s and PhD students helps us program and test these algorithms in our systems.’ Pijpers sees excellent prospects for using these new insights to make better predictions on the development of the economy and society. Among other things he cites the important role played by public policy and research institutes. ‘They’re working on behalf of ministries to calculate the effects of all kinds of developments. There’s a risk of slightly incorrect assumptions being made about the relationships in the models on which these calculations are based. Those models need calibration (comparing a system to a standard to determine its characteristics, Ed.) in order to highlight any assumptions that may not be entirely correct.’


World of mathematics and statistics

In his dual role as a professor by special appointment and as senior methodologist for CBS, Pijpers expects to build effective links between the mathematics of complex systems and the world of national social and economic statistics. ‘I’m going to take all the academic knowledge available on the existence and measurement of complex systems and bring it into the CBS sphere of operations.’ Conversely, Pijpers believes CBS has an important role to play in disseminating knowledge of the complex new models. ‘The intention is that all the new data generated on networks, relationships and interactions will be made available to researchers and scientists. They’ll have to use these data on an anonymised basis.’ Pijpers is optimistic about the timeframe for achieving this. ‘We’re already engaged in mapping personal social networks. The data are only published at group level and can never be traced back to individuals. I expect this work to be completed in 2022. In the case of companies it requires a slightly longer-term approach. For this group I believe we’ll have a readily usable network available in two years’ time.’

The inaugural address is a public speech in which a newly appointed professor officially accepts the post. Dr Frank Pijpers (1964) has been appointed professor by special appointment of Complexity for Official Statistics at the Faculty of Science at the University of Amsterdam. The chair was established on behalf of Statistics Netherlands (CBS). Pijpers will combine his professorship with his work as programme manager for methodological research and senior methodologist at CBS.