Each quarter, Statistics Netherlands (CBS) publishes data on goods that are loaded and unloaded at Dutch seaports. This information is provided to CBS by customs and by maritime data specialist Royal Dirkzwager. Furthermore, CBS conducts research on the usability of new methods based on these and new sources for further improvement of existing maritime statistics and the creation of new statistics.

The first new application is based on customs data regarding containers. These containers enter Dutch ports on seagoing vessels and subsequently leave these ports after having been loaded onto other seagoing vessels. CBS carries out research on these so-called transshipments as part of a project commissioned by the European Union. At the end of this year, CBS will release a more comprehensive article on transshipments.

The second and latest source studied by CBS is the so-called Automatic Identification System (AIS). This system enhances maritime safety by allowing ships to communicate with each other and from ship to shore with notifications about e.g. position and speed. This big data source is available worldwide in a standardised format. As a result, data can be compared effectively at international level and be used to improve and expand maritime statistics. Under the direction of CBS, the EU has launched research on the possibility of mapping port calls by ships using AIS as a basis. With this data, we are able to determine which types of ships call at which ports and how long they stay there, for example. We also use this research to determine which sea routes are used and at which ports calls are made.

The animated map below shows the possibilities of this big data and is based on a combination of the two new sourcesd. Customs data enable us to connect container giants to vessels used for further transportation of containers that have been deposited on the quayside. The routing of vessels can be shown using AIS data.
The map shows how two container giants, one after the other, depart from China, pass the Suez Canal and reach the Port of Rotterdam. A substantial number of the containers are unloaded at quays and then transshipped to other ports by other vessels. The routing of these connecting vessels is also shown. For certain longer routes there is no information available due to missing data. Therefore, these routes have been estimated and may deviate from the actual route taken. The animation shows that the first container giant has several stops at other European ports, where some of the containers are unloaded. The shipment of these containers to other ports in Europa is not shown here. 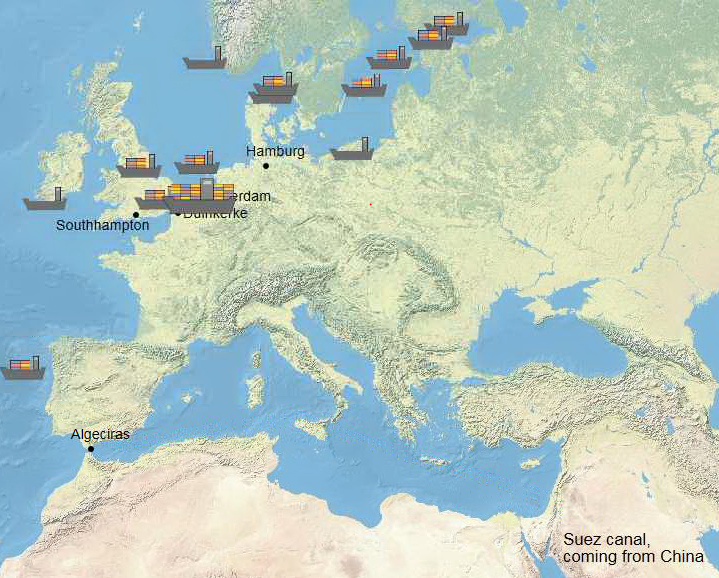 This data can be used to produce statistics on e.g. maritime and inland navigation and the environment (CO2 emissions), and may also be used as an economic indicator. For example, it helps to monitor developments in transport and destinations of certain types of goods. On the basis of patterns, it is possible to make comparisons at international level. It will be clearly visible, for example, when more container ships are coming to Rotterdam. Large averages are more relevant to report for these applications than a few examples as shown in the visualisation. The first results which are partly based on this research can be found in this news release.

This research has been carried out at the Center for Big Data Statistics (CBDS), which was launched by CBS in September 2016. Around forty partners from government, industry, science and education work together within the CBDS to develop big data technologies and methods for the production of statistics. The CBDS strives to make statistical output more timely, produce new statistics and add more depth to existing statistics, e.g. on a regional or sectoral level. In this way, policy support is enhanced while efficiency is boosted through automated integration of data sources and flows.
The CBDS offers a large variety in projects in consultation with its partners. An example is this research. All CBDS projects are published on the CBS Innovation page.

We would like to know your experiences with this new AIS visualisation. This may be a general impression, but may also include specific points, whether positive or negative. For example, it is clear what is shown? If not, how can it be improved? Also, is any relevant information missing?