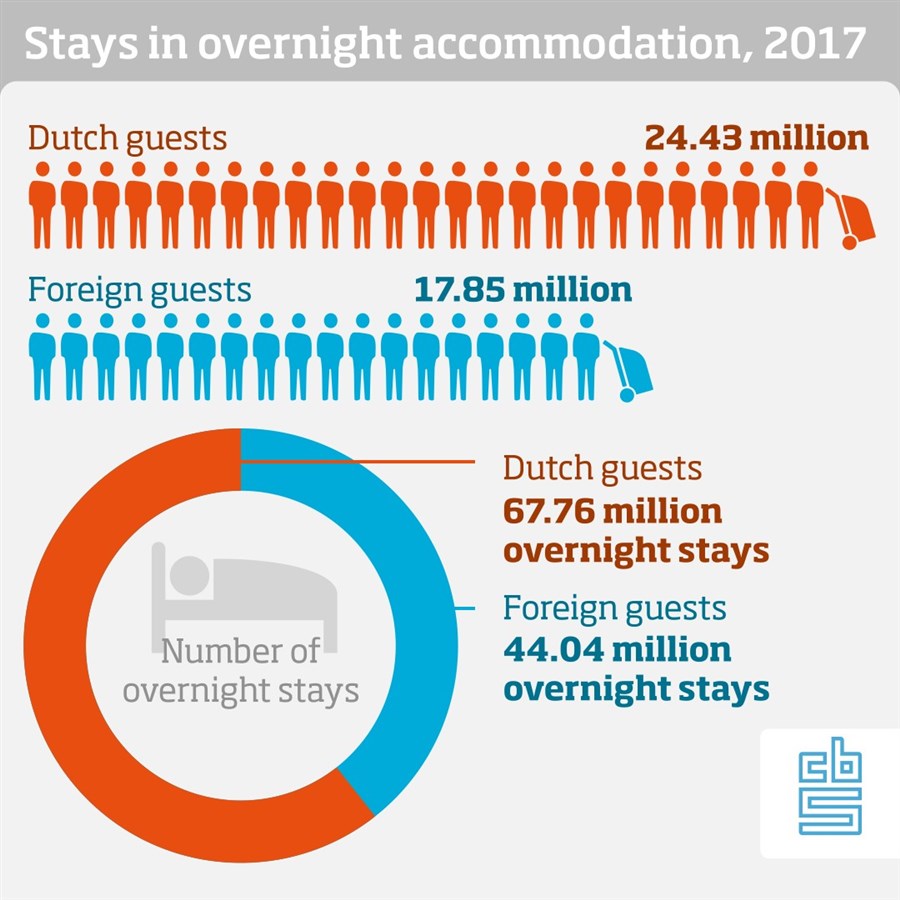 Growth in 2017 was primarily driven by an increasing number of foreign visitors, by 13 percent relative to the previous year. The 17.8 million foreign guests combined spent 44 million nights in Dutch overnight accommodation, an increase of 11 percent relative to 2016. Domestic tourism grew by 6 percent to 24.4 million guests spending a combined 67.8 million nights. This represents a growth rate of 2 percent on 2016.

The above figures do not include tourists who stay in accommodation with fewer than five beds available; most private accommodation that is offered in online marketplaces falls within this category.

Due to the growth in recent years, tourism has become a substantial sector of the Dutch economy. By the end of 2016, total tourist expenditure amounted to 75.7 billion euros or 3.9 percent of gross domestic product (GDP). Tourism is good for 641 thousand jobs in the Netherlands.

Nearly 80 percent of all foreign visitors last year were Europeans, with over half from neighbouring countries such as Germany, Belgium and the United Kingdom. Visitors from these countries accounted for altogether 64 percent of all overnight stays by foreign guests.

The growth in tourist arrivals from Germany in particular continued: in 2017 by 14 percent (665 thousand more guests) relative to the previous year. Germans were also the longest staying guests with an average 3.4 nights spent here.

In 2017, more than 20 percent of foreign tourists staying at Dutch overnight accommodation came from outside Europe. Most intercontinental tourists came from the Americas (11 percent) or from Asia (8 percent). The number of arrivals from these two continents grew by 22 and 25 percent respectively. Other rapidly growing groups included tourists from Taiwan (79 percent), Iceland (40 percent) and Russia (36 percent). The number of inbound tourists from China increased by 26 percent. Compared to the rest of all foreign guests, they still form a relatively small group. Guests from outside Europe were the shortest staying group: on average, they stayed 1.8 nights.

Germans like to stay on the Dutch coast and also visit Amsterdam relatively often. Belgians like to skip across the border to Limburg and Noord-Brabant but are also staying on the coast. The British mainly head for our capital city. This is also the case for most of the intercontinental visitors. Amsterdam is experiencing increasing pressure from tourism due to this growth.