The remainder of the group not in employment (nearly 3.9 million) had not looked or/nor been immediately available for work recently. Their number rose by an average 4 thousand per month, as reported by CBS. The Employee Insurance Agency (UWV) recorded a decline in the number of unemployment (WW) benefits to a total of 330 thousand in February. 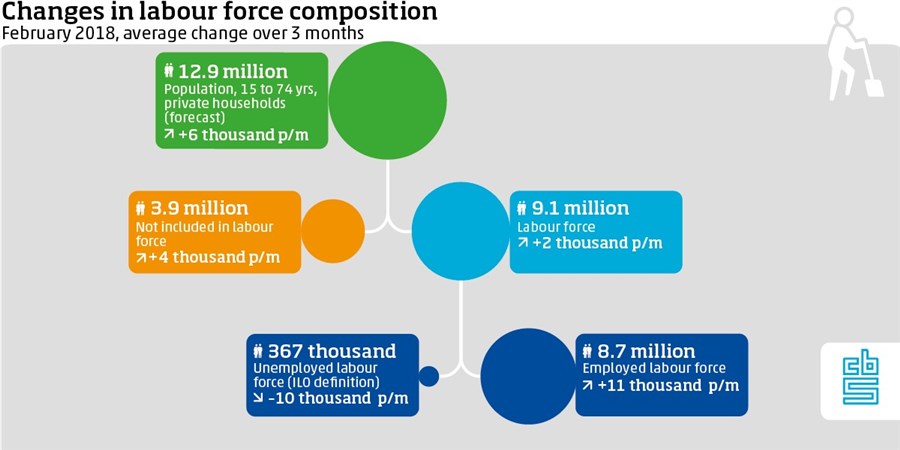 (ILO) unemployment rate down to 4.1 percent

In order to enable comparison of cyclical developments in the labour market between countries, the unemployment indicator of the International Labour Organisation (ILO) is often taken as a measure. According to this indicator, the ‘unemployed’ includes all 15 to 74-year-olds who do not have paid work but who have been looking for paid work recently and who are immediately available. There were 367 thousand unemployed in February, equivalent to 4.1 percent of the labour force. The unemployment rate stood at 4.2 one month previously.

The unemployment rate does not include all people without work who would like to work. People willing to work who have not been looking and/or have not been immediately available for whatever reason do not fall within the scope of the ILO definition of unemployment. This definition also does not include people who work part-time and are looking for extra hours of work. CBS describes these groups on a quarterly basis. Furthermore, the number of hours worked per week of people in paid employment is reported on quarterly. The monthly figures on people in paid employment (the active labour force) cover all people in work, regardless of the number of hours worked.

The number of current WW benefits fell in February by 1.6 percent relative to the previous month, to a total of 330 thousand. This is equivalent to 316 thousand benefit recipients. In January 2018, the number increased due to seasonal influences, but the downward trend is now being continued. Of the total number of WW benefit recipients, 32 percent had been receiving the benefit for one year or longer.

UWV: Decline in almost all sectors

Relative to one year previously, the number of WW benefits fell by over 86 thousand or -20.7 percent. The number of WW benefits was down in alle occupational classes and sectors, with the exception of financial services. Many job seekers are still having difficulty finding employment in this sector. The construction sector saw the sharpest decline: -41.5 percent.

Labour participation rate still lower than at onset of crisis

In February, 67.2 percent of the population aged 15 to 74 years were in paid employment. The net labour participation rate reached a peak in February 2009 with 68.3 percent, falling subsequently to 64.4 percent at the start of 2014. The rate has risen again nearly each month since then. Among the age group 45 years and over, the labour participation rate is higher than at the start of 2009. The rate is still lower than before the crisis among the group aged 25 to 44 years, however, in particular among men. Nevertheless, in February 2018 the labour participation rate was highest among men in that age group: 89.3 percent. This is still around 10 percentage points higher than among women in the same age group.

In Q4 2017, close to 8.7 million out of the 12.9 million people aged 15 to 74 were in paid employment and 391 thousand were unemployed (ILO standard; not seasonally adjusted). These included 138 thousand people who had been seeking work for at least twelve months. Almost two in three long-term unemployed were aged 45 years or older. The groups of employed and unemployed combined represent the Dutch labour force.

The other part of this age group - almost 3.9 million - were not included in the labour force. The majority of the latter group were not willing or not able to work (over 3.2 million), e.g. due to education or training, care for others, sickness or old age. In addition, there were 205 thousand people who were willing to work in Q4, but who were not looking and not immediately available for work. This group included people in training or education. Furthermore, there were people either looking (153 thousand) or immediately available for work (257 thousand). 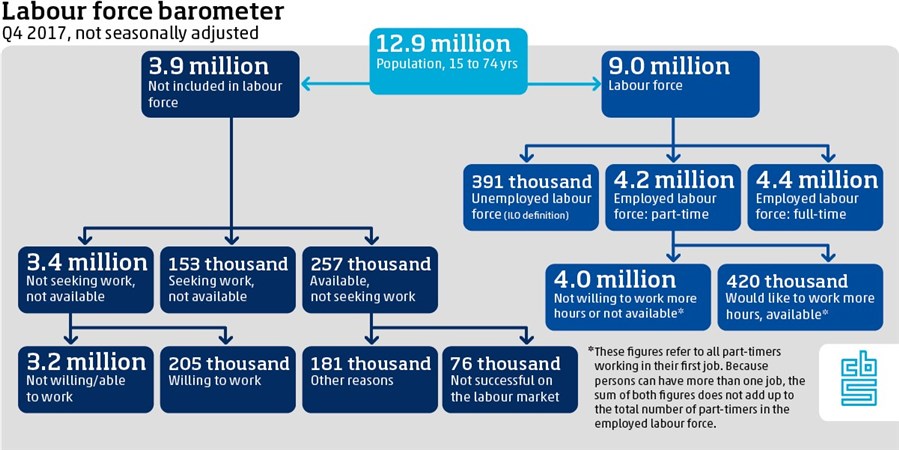