Last year, Dutch lorries carried 2.5 million tons of goods to the United Kingdom. Nearly 70 percent of these goods were destined for South East England, East and West Midlands and London; 4 percent of all goods went to Scotland and Wales and Northern Ireland accounted for 2 and 1 percent respectively. 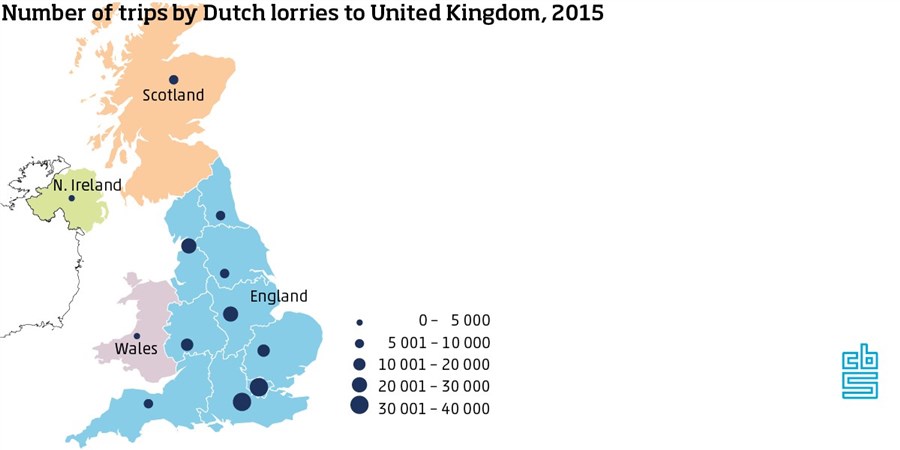 Share Dutch lorries in road transport to UK has fallen

More than one-quarter of road freight to the UK in 2014 was carried by British lorries. Dutch lorries accounted for over 8 percent. Among foreign transporters, Poland and Ireland were the only countries to carry more goods to the UK than the Netherland.

However, the share of goods exported to the UK by Dutch lorries (12 percent) was larger in 2005 than nowadays. Since 2005, Polish lorries have increased their share in goods transport to the UK considerably from 4.5 percent in 2005 (the year Poland joined the EU) to 17.5 percent in 2014. More and more often, Polish lorries take on goods destined for the UK in the Netherlands, Germany, Belgium and France.

Conversely, British lorries crossed the Channel 44 thousand times to deliver goods in the Netherlands in 2014. The province of Noord-Brabant was the most frequent destination, followed by the provinces of Noord-Holland and Zuid-Holland. Altogether, they delivered 356 thousand tons of goods, mainly food products, chemicals and break bulk cargo.

In total, British lorries made 785 thousand international trips from the UK in 2014 carrying 9.3 million tons of goods. More than 60 tons in each 100 tons were destined for neighbouring country Ireland. Over 80 percent of these goods were from the region of Northern Ireland. On the European continent, France was the main country of destination for British lorries, followed by Belgium and Germany. With a share of nearly 4 percent of all goods transported to the mainland, the Netherlands was the fifth country of destination for UK hauliers.

Total weight carried by British lorries from the United Kingdom to destination, 2014

Mortality in week 17 higher than expected