This table provides data about perceived health and chronic disorders of the population of the Caribbean Netherlands aged 15 years and older. It comprises the following aspects:
- perceived state of health
- chronic disorders
These aspects are shown for the Caribbean Netherlands, and also for the islands Bonaire, St Eustatius and Saba separately. Also breakdowns by sex, age and level of education are presented.

The research is a sample survey. This means that the figures shown are estimates for which reliability margins apply. These margins are also included in the table.

The Omnibus survey was carried out for the first time on Bonaire, Saba and St. Eustatius in 2013 during the month of June and the first week of July. For the second time the Omnibus survey was carried out on Bonaire during the months of October and November 2017, and on Saba and St. Eustatius in the period January to March 2018. In 2021, the survey was conducted from October to December.

Status of the data:
The figures for the most recent period are provisional.

Self-perceived health
Refers to the question: How do you assess your general state of health?

Good or very good
Percentage of persons who answered 'good' or 'very good' to the question concerning their general state of health.

Diabetes total
Percentage of persons who answered 'yes' to the question:
Do you have diabetes?

Hypertension
Percentage of persons who answered 'yes' to the question:
‘Have you suffered from hypertension in the last 12 months?’

Cancer
Percentage of persons who answered 'yes' to the question:
‘Have you ever had any form of cancer?’

% with no long-term disorder
Percentage of persons suffering or having suffered from none of the following disorders in the last 12 months:
- Serious or persistent disorder in neck or shoulder
- Asthma, chronic bronchitis, COPD
- Chikungunya
- Chronic eczema
- Chronic arthritis
- Serious or persistent intestinal disorders
- Dizziness with falls
- Arthrosis of hips or knees
- Hypertension
- Dengue
- Migraine or severe headache
- Incontinence
- Serious or persistent back disorder
- Constriction of blood vessels in abdomen or legs
- Zika virus
The figures for 2013 and 2017/2018 do not include chikungunya and the Zika virus. Psoriasis was included in the figures for 2013. 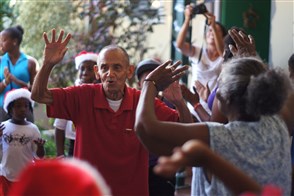