This table provides twice-yearly information about the number of pigs on Dutch agricultural holdings.
The number of pigs is broken down into:
- type of pigs (piglets, pigs for fattening, breeding pigs);
- reference date (April, August and December).

N.B. the considerable difference between the figures for 1997 and the previous and subsequent years are caused by the swine fever outbreak in February 1997 and the following clear-outs.

Status of the figures:
New figures are provisional when first published. When new data from the Agricultural census become available the provisional figures become definite.

Changes as of 15 February 2021:
The provisional figures for December 2020 have been added.

Pigs, total
Total of the pig population on agricultural holdings, present on the reference date.
The pig population can be broken down into piglets, young pigs, pigs for fattening and breeding pigs.
_
N.B. the considerable difference between the figures for 1997 and the previous and subsequent years are caused by the swinefever outbreak in February 1997 and the following clearouts.
Piglets related to sows
Young pigs, to 50 kg
Piglets with a live weight of less than 50 kg.
Weaned piglets (piglets no longer suckling at the sow) and young pigs for fattening or breeding weighing less than 50 kg.
Pigs for fattening, 50 kg or more
Fattening pigs (including rejected boars and sows) of at least 50 kg.
_
Sows and boars for fattening: pigs taken out of breedingproduction for fattening to be slaughtered.

Covered sows
Covered or artificially inseminated sows, assumed to be pregnant on the reference date.

Sows related to piglets
Suckling sows until their piglets are weaned. Weaned piglets are permanently withdrawn from the suckling sow.

Young sows
Gilts, not yet covered. 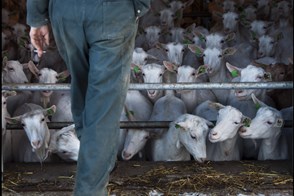