‘Social cohesion’ refers to a society’s cohesiveness in terms of both people’s trust and their participation in that society. Integration is another relevant aspect, involving discrepancies between demographic groups, e.g. between low-skilled and high-skilled people and those with and without a migration background. Social cohesion is strengthened as levels of trust, participation and integration increase.

Trust in each other and in institutions

In the past, CBS researcher and Maastricht University professor Hans Schmeets frequently researched social cohesion. ‘One of the reasons for starting this project is that we wish to see local residents of Heerlen become more engaged with their city. An earlier baseline measurement taken by CBS showed that Heerlen is lagging behind 40 similar cities. That measurement was based on 17 key indicators drawn from the study “Social Cohesion and Well-being” in the period 2012–2018. Trust in particular is relatively low, both in each other and in institutions. Heerlen also lags behind in terms of participation, such as by volunteering. Together with the Municipality of Heerlen and six other organisations, we are now looking for innovative ways to boost local citizens’ participation. CBS has been asked to join the project because of its expertise in areas such as collecting and analysing data from a range of sources including big data, registers and population samples. Other important considerations included the existing contact between the Municipality of Heerlen and the CBS Urban Data Center/Heerlen.’

Pieter Bonnema is the initiator and project leader of this new project at the Municipality of Heerlen. He has outlined some of the challenges facing the local authorities: ‘We are seeing public spaces deteriorating. This is partly due to political choices, which mean that less money is available for more public spaces. Heerlen city could also use an economic boost – for example there’s a lot of vacancy in shops,. We want to restore economic dynamism. In addition, we want to enhance citizen participation. We’ve found that residents of Heerlen are less likely to vote than residents of other municipalities in Limburg – just 44 percent in 2018. The political writing is on the wall, and we really want to do something about that now.’ 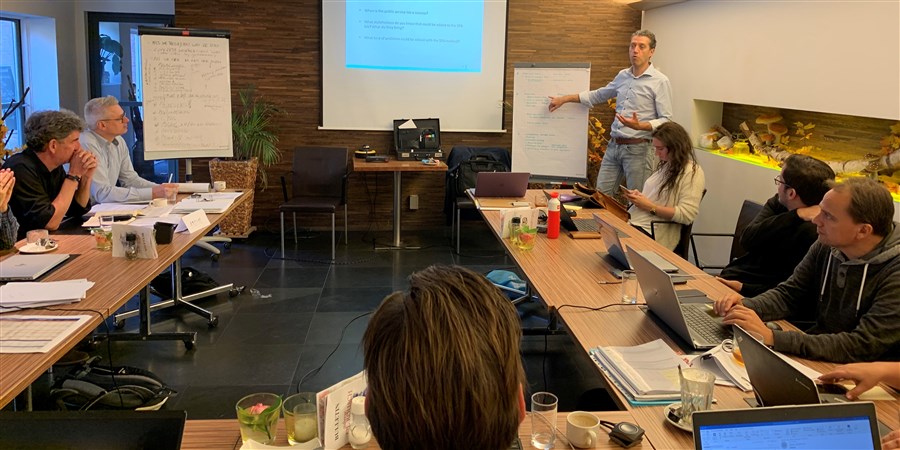 The kick-off meeting between the Municipality of Heerlen, CBS and 5 other organisations on 24 October 2019 for the study of social cohesion in Heerlen.

That situation gave Bonnema the idea to develop a platform that would reward citizens for participating in the municipality. ‘An innovative concept has been developed in line with our neighbourhood deals, which is an elaboration of our 'Vision of the public space'. Analysis of these neighbourhood deals showed that the people of Heerlen are willing to beautify parts of their local public spaces. A new platform is being created by means of blockchain technology that allows citizens to carry out tasks for the Municipality of Heerlen according to a rewards system. The rewards take the form of a digital token that you can only spend within Heerlen’s local economy. Although the idea arose from the perspective of public spaces, now the concept can be applied to several different domains – things like safety, prevention or care, for example.’

The project the Municipality of Heerlen is implementing, in cooperation with CBS and five other organisations, needs to comply with some strict requirements set by the European Union. It is subject to regular audits, the first of which is due to take place in the near future. ‘This project in Heerlen is very important to the European Union, as part of the Urban Innovative Actions programme,’ Bonnema explains. ‘That programme seeks out new innovative projects in urban areas. Of the 175 projects that were submitted, only 20 were selected. The Heerlen project was one of those 20. If this project in Heerlen is a success, it could be taken up in other European cities.’

According to Hans Schmeets, CBS’ role in the project has three different aspects. ‘From February to May 2020 we’re going to take another measurement among 1,000 Heerlen citizens about the current state of their social cohesion and well-being. At the end of 2021 we will approach these citizens again and ask them to describe the effects of all the work involved in the experiments. We will then compare the results with residents of other municipalities. We are also advising on the development of an app for this experiment. CBS will have some input into that app, such as what questions to ask participants. The app itself will be created by one of the project’s partners, CoTown. CBS will also analyse the data from the app and enrich it with register data from the System of Social Statistical Databases. In addition, we are looking to take advantage of the expertise of behavioural economists, including Professor Riedl from Maastricht University. We will also use social media to analyse the state of social networks in the various neighbourhoods in Heerlen. We’ve done similar research in the past in the Municipality of Horst aan de Maas.’

What does Bonnema see as the biggest challenges for this project? ‘The entire project will stand or fall on its adoption by the citizens. Are they willing to carry out tasks that will benefit specific social projects. We want to hand over responsibility for this to the citizens, although the municipality has set some requirements. Another important issue is that we need to find entrepreneurs who are willing to accept the new digital tokens. We’re also holding meetings with the Tax and Customs Administration. We set a limit for the extra income citizens can earn, but the tax authorities are keen to deduct VAT, even at very low rates of additional income. Each individual citizen can apply for consideration under a ‘small business scheme’ that offers the possibility of waiving that VAT, but this mustn’t become an obstacle to their participation in our project. We’d like the scheme to be more accommodating for the participants.’ In spite of the challenges, Bonnema is very enthusiastic about this project’s chances of success. ‘I have a huge intrinsic motivation to make this a success.’