Provisioning ecosystem services are the products obtained from ecosystems, including food, fiber, fuel, genetic resources, natural medicines, pharmaceuticals and fresh water. For the Netherlands, the following provisioning services have been quantified, mapped and analyzed:

The agricultural production of potatoes, cereals and other crops, mainly sugar beets, onions, vegetables and fruit (ton/ha/year). The maps were produced by combining the official registry on agricultural parcels with the annual harvest projections, either per province (where available) or national. 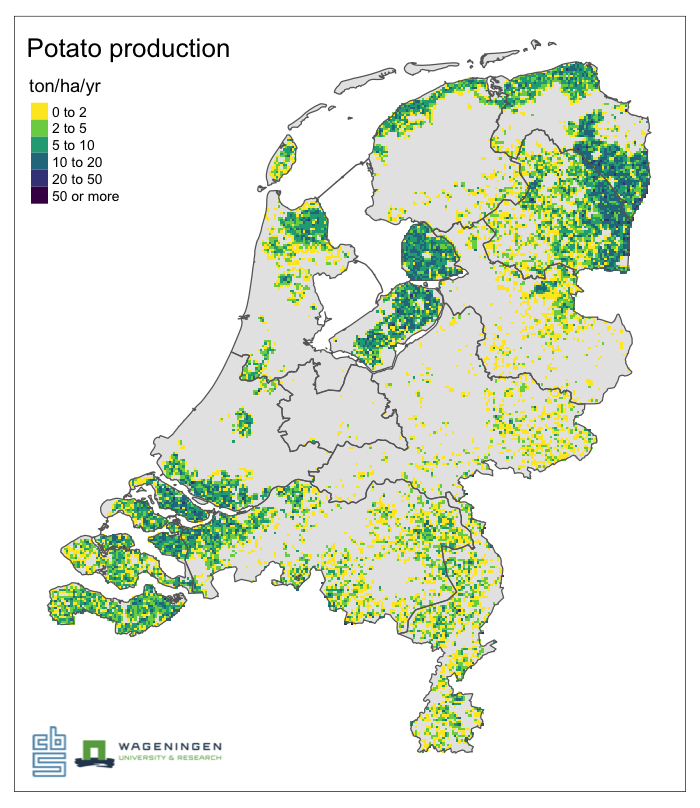 The agricultural production of grass (on meadows), and maize (ton/ha/year). Grass production includes both grass harvested and grass consumed by lifestock. As with crop production, maps were constructed by combining parcel registries with provincial or regional harvest estimates. For grass additional information on the spatial heterogeneity in production intensity was obtained from remote sensing analysis of net primary production.

The production of timber (expressed as m3/ha/year) from forests and other wooded areas is estimated by combining the mapped extent of forests and wooded areas with the results of the Dutch Forest Monitoring (3190 sample points). Based on this data set, a regression model was developed that takes tree species and province (as a proxy for regional growth conditions) into account.

The availability of biomass for energy production(expressed in ton/ha/year) is mapped using remote-sensing based estimates of net primary production of vegetation. Only “(semi-)natural grasslands” and “other unpaved terrain” are considered to be sources of harvested biomass (forest are assumed to deliver timber, not biomass).