Statistics Netherlands (CBS) is studying the possibilities of improving statistics with innovative methodologies, such as big data sources. Research findings from the US gave rise to the question whether changes in fertility could be an early indicator of changes in the business cycle.

A recent report by the American National Bureau of Economic Research (NBER)<link NBER report> found that economic downturns were preceded by a falling growth rate for the number of pregnancies. Such a link could offer prospects for the development of a quick business cycle indicator using big data sources.

Previous (CBS) research has shown a correlation between the business cycle and the birth rate. Economic recessions and low confidence in the economy lead to lower fertility rates, while relatively more children are born during economic boom periods. The present understanding among economists and demographers is that ‘baby booms’ lag about one to two and a half years behind the economic business cycle. 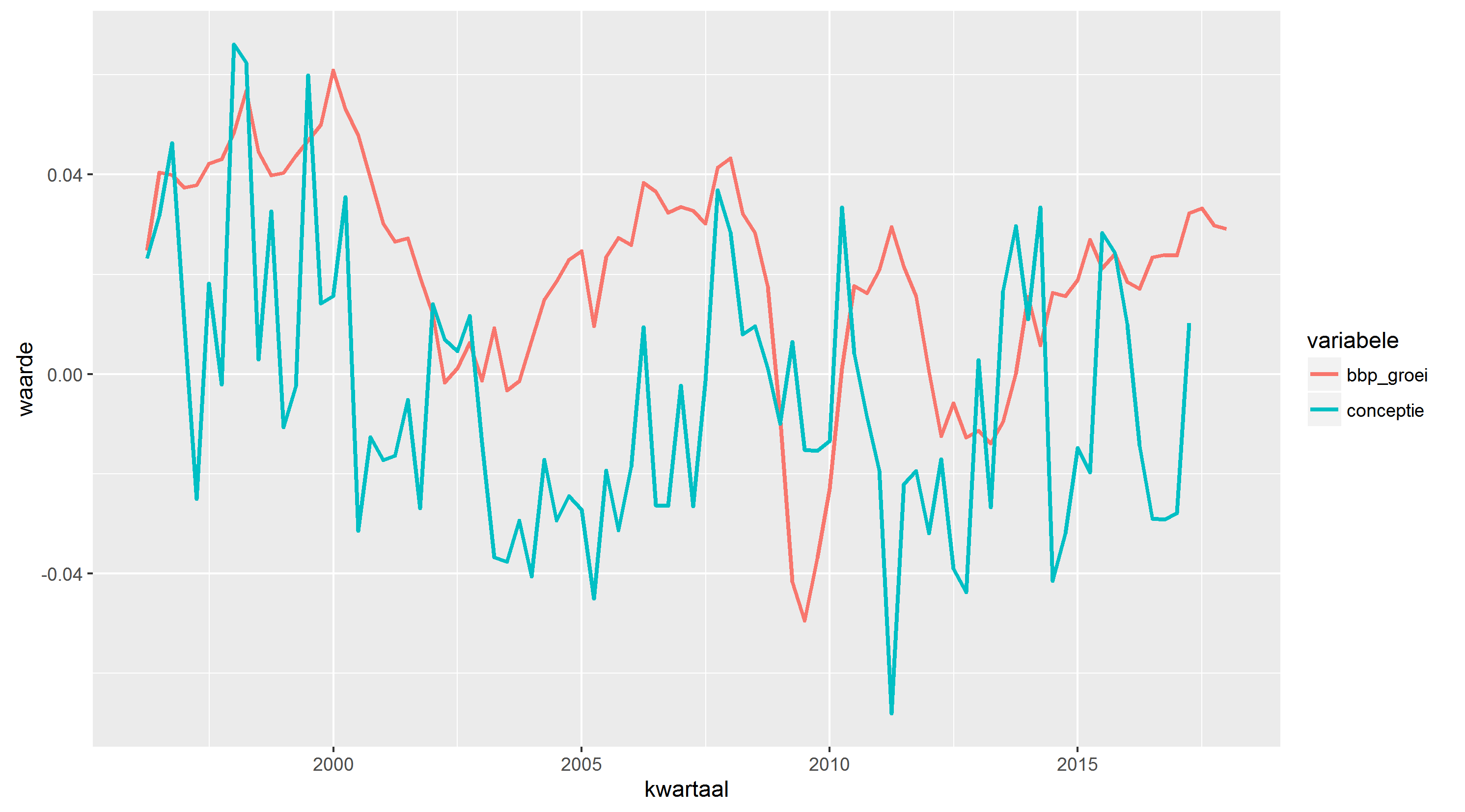 Different results for the Netherlands than America

CBS investigated whether the American situation is comparable to the Dutch. Just as in the NBER report, the year-on-year growth of GDP per quarter was compared to the year-on-year growth of the number of live births. The quarterly series on live births was shifted by three quarters as a rough estimate of the conception date. Year-on-year growth of the number of conceptions does appear to decline somewhat before an economic contraction. However, unlike in the US, significant reductions have indeed occurred without being followed by a recession. Therefore, we have no reason to assume that a declining number of early pregnancies will lead to economic recession.

It should be noted that the American and Dutch studies merely cover three and two periods of recession, respectively. Moreover, CBS was unable to include data on abortions and miscarriages in its research.

Trends in birth rates are also determined by factors other than the business cycle. For example, the number of women who are of reproductive age is important, but their personal situation as well. Young people are increasingly having to deal with insecurities. It takes them longer to land a permanent job, find a long-term partner and become homeowner. These changes, which seem to have become structural rather than temporary, may now play a larger role in the decision to have children than fluctuations in the business cycle. These may be the reason that - despite a favourable economic situation - the fertility rate has not yet increased but rather decreased.

This is a finding for the United States, which has been compared to the Dutch situation. Can you give us a reason why we have not found the correlation between fertility and GDP? We would like to know. Do you have any ideas on other issues that we should consider when monitoring economic development? Please let us know. There are many other (international) developments for which we can initiate a study on the situation in the Netherlands. We would like to hear your ideas on this.