An annual election held by the trade press identified the five most important logistics hubs of the Netherlands as: West-Brabant, Tilburg-Waalwijk, Venlo-Venray, the Rivierenland region and Utrecht. Of the altogether 1.1 billion tonnes of goods which were transhipped in 2017 to and from inland vessels, lorries or trains, one-quarter were on their way to or from one of these five hubs. These were mostly goods carried to and from the Port of Rotterdam. Among the five hubs, the most significant growth in 2017 in terms of transferred weight was seen in the Rivierenland region, Venlo-Venray and West-Brabant. 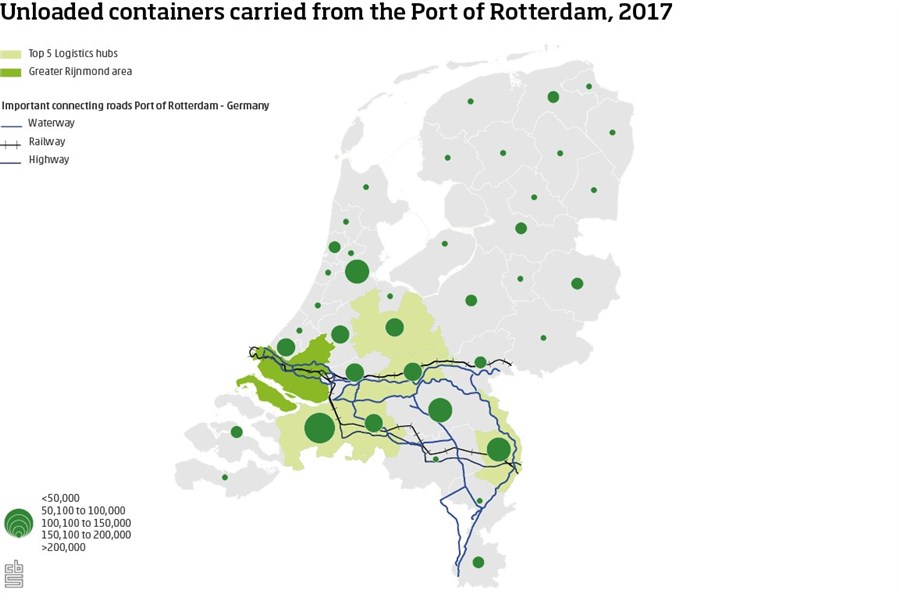 40 percent of hub transhipments are by sea container

Of the total weight transported from the Port of Rotterdam to the Dutch hinterland last year, 30 percent was carried in containers. It was slightly higher at four out of the five hubs, namely 40 percent on average. Only in Utrecht was the share lower; relatively large amounts of sand, gravel and petroleum products were unloaded in bulk.

Number of sea containers up by one-fifth on 2010

In 2017, the five logistics hubs handled 21 percent more sea containers relative to 2010. Over the same period, the total number of sea containers in the Netherlands unloaded from inland vessels, lorries and trains grew by 14 percent. Among the five logistics hubs, Venlo-Venray saw the strongest growth (59 percent) in container handling, followed by the Rivierenland region (43 percent). The latter was mainly on account of the newly opened inland waterway terminals in Wanssum (2010) and Tiel (2013).

The largest number of sea containers was handled at the West-Brabant hub. This is partly due to the fact that smaller vessels coming from the Rotterdam port area can continue on to Moerdijk for loading and/or unloading. Due to their strategic locations close to the border with Germany, Venlo-Venray and the Rivierenland region are often used for transhipment of goods which arrived in sea containers at the Port of Rotterdam. Part of Tilburg’s hub function is to serve as a stop-over for goods transport from China by train (the New Silk Road), which commenced in September 2016. Goods are distributed in Tilburg before being taken to the main final destinations.

Most containers carried from Rotterdam port going to West-Brabant