The teaching workforce in primary education is currently ageing. In the 2003/’04 school year, 11 percent of primary teachers were 55 years of age or over, as against 21 percent in 2017/’18. Male teachers in particular are ageing rapidly: currently, over one in three teachers are aged 55 or over. Among their female counterparts, this share stands at nearly one in six (18 percent). In ten years’ time, the majority will have left the classroom.

The number of potential new teachers has declined relative to school year 2003/’04. For example, out of all first-year students at universities of applied sciences (HBO) in 2003/’04, 9.7 thousand were in primary teacher training (PABO). At 4.5 thousand, this number had more than halved in 2017/’18. This number has started to go up again slightly over the past three years.
In recent years, PABO teacher education has been affected by tighter admission requirements. These changes were intended to improve the quality of training, but have also had consequences for the number of entering first-year students.

Male PABO students have been underrepresented for years, but their number has been fairly stable at 1,000. The number of female students attending PABO is falling. During school year 2003/’04, there were 8.3 thousand women among first-year PABO students, versus as few as 3.3 thousand in 2016/’17.

A job outside primary education

Not everyone with a degree in primary teacher training will become a classroom teacher. Among male PABO graduates, 6 in 10 are engaged in a profession other than teaching. Some are teachers in secondary education (6 percent) while others have become managers (10 percent). Women with a PABO diploma who do not work as primary school teachers are relatively often childcare group leaders, teaching assistants (9 percent) or teachers in secondary education (4 percent). 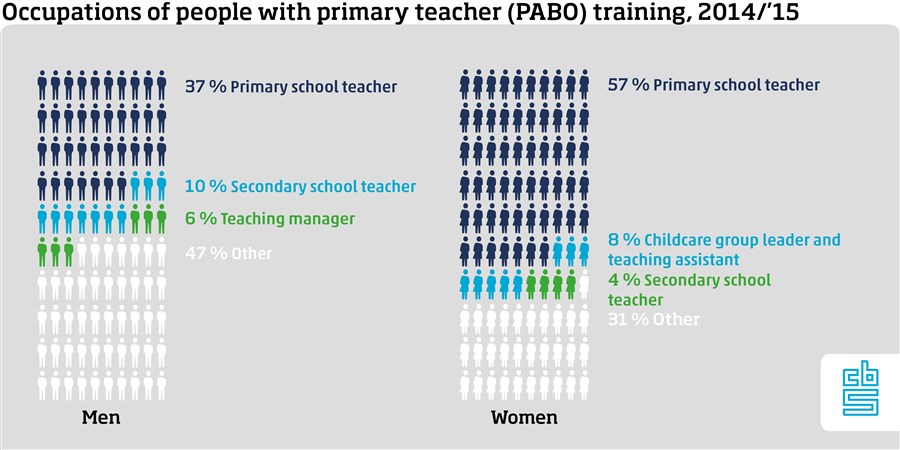