Four main groups of materials flow through the Dutch economy: biomass, fossil energy materials, metals and non-metallic minerals. Each group contains both raw materials and products. For example, metals include not only the raw material iron ore but also products that consist mainly of metal, such as cars.

A significant share of the materials used in the Dutch economy arrive through imports (74 percent in 2014). Nearly one-third of these are re-exported without undergoing substantial processing (re-exports). The remaining share is processed into products, together with raw materials extracted domestically. Those products which are not exported are used for domestic consumption (use of materials and energy generation). Consumed products with a long life-cycle, such as buildings and cars, stay in the economy in the form of stock for some time before being released as waste. Most of the waste is subsequently recycled. 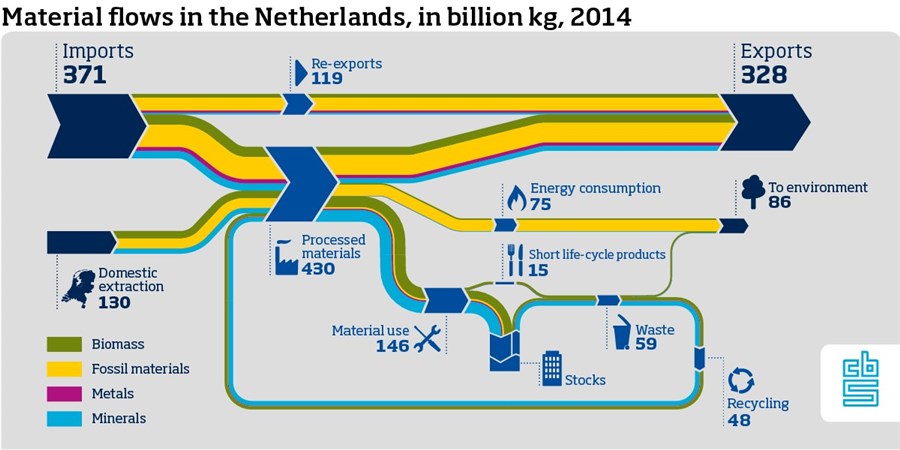 Of all materials ending up in the Dutch economy - 549 billion kg in 2014 - around 9 percent are recycled, secondary materials (48 billion kg). Relative to total consumption (221 billion kg), the share of recycled materials amounts to 22 percent. In 2014, the Netherlands recycled 81 percent of its waste (59 billion kg), one of the highest recycling rates in Europe. Aside from reuse, other strategies are required to make the planned transition to a circular economy as part of the Government-wide programme entitled ‘The Netherlands circular in 2050’. Examples are more efficient use of materials, product improvement to extend their lifecycle and replacing materials for instance producing plastics from biomass instead of crude petroleum.

In comparison with other EU countries, the Netherlands has a high per capita material use. Especially the input of fossil energy carriers is high, due to both gas extraction in the Netherlands and imports of crude petroleum which is largely re-exported as fuel after refining. The bulk of materials which are processed domestically leave the Netherlands again as export products.