In 2017, the Dutch cultivation area for sugar beets exceeded 80 thousand ha for the first time in ten years. This was related to the abolition of EU sugar production quotas. In 2017, the European sugar sector underwent major changes: on 30 September 2017, the quota system for sugar beet producers in the EU was abolished. The abolition brings to an end production caps on sugar beet for all countries and growers within the EU. In the Dutch sugar sector, however, agreements have been made regarding restrictions on production. As of cultivation year 2017, sugar beet production is regulated by certificates of delivery instead of quotas. These certificates allow a maximum delivery of sugar beets to sugar co-operatives.

In 2014, sugar production exceeded quotas, leading to fewer sugar beets being sown in 2015 and a small cultivation area in the same year. 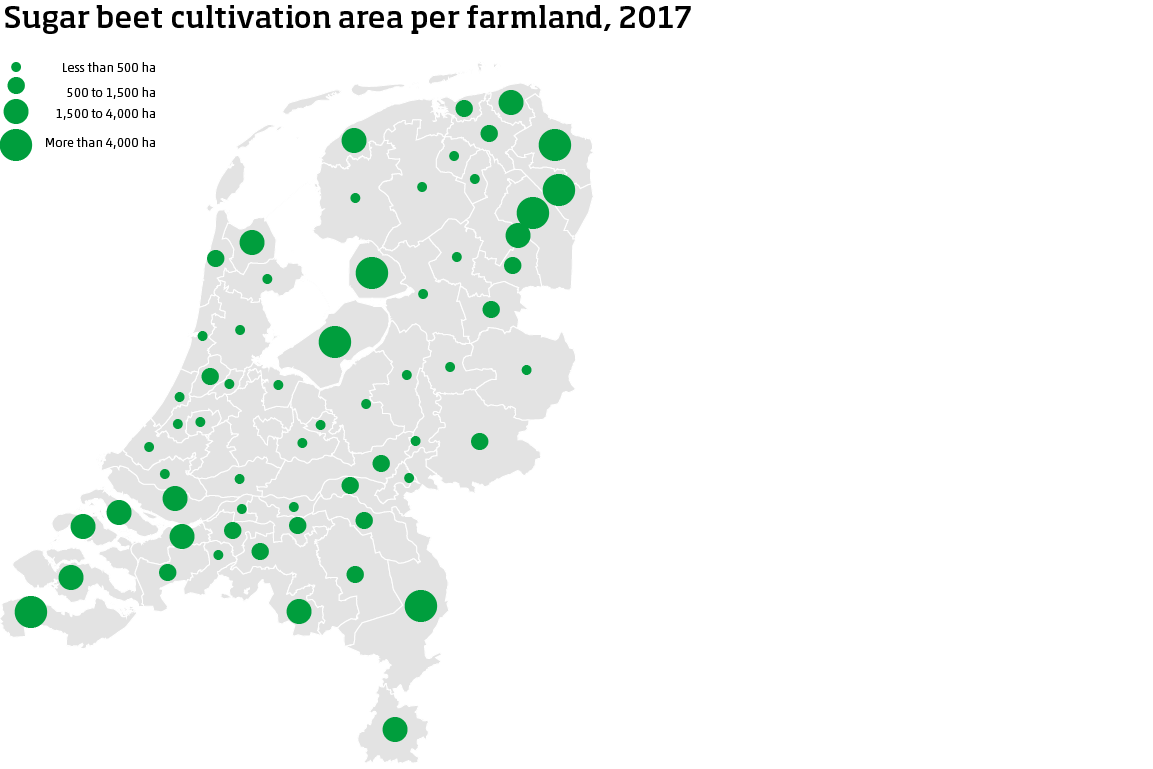 Many farms in the south, largest growing areas in the north

In 2017, there were over 8 thousand sugar beet growers, nearly 4 percent more than in the previous year. Over one-third of these farms are located in the provinces of Noord-Brabant and Zeeland. However, they account for only 27 percent of the total sugar beet cultivation area in the Netherlands. The growing areas of farms in the southern provinces are substantially smaller than those in the northern provinces. The average cultivation area per farm in the north is more than twice as large as in the south (16 ha versus 7 ha respectively).

In 2017, sugar beet production reached a record yield of 93 tonnes per ha, according to arable farming yield figures. This means that the yield per ha was 19 percent higher than the average over the previous ten years (78 tonnes per ha). The rise can be explained by the use of new beet varieties and techniques as well as favourable growing conditions in 2017, for example.

The Netherlands among top 3 for highest yield

With a cultivation area of over 85 thousand ha, the Netherlands takes up fifth place in Europe. In terms of yield per ha, our country ranks third. The average for the period 2012 - 2016 was a yield of 81 tonnes per ha. Spain leads with an average yield of 92 tonnes per ha; France comes in second at 88 tonnes per ha.