UWV reports that the number of current unemployment benefits stood at 416 thousand in February 2017 i.e. a decline by 3 thousand (-0.7 percent) relative to January. The number of female benefit recipients decreased by 1.3 percent, the number of male recipients remained more or less stable compared to January. In traditionally female-dominated sectors like education (-2.8 percent) and health care and welfare (-1.2 percent), the rate of decline was indeed above average.

Over the first two months of this year, UWV provided 81 thousand new unemployment benefits, 20.3 percent down from the same period last year. Year-on-year, the number of new benefits decreased across all sectors except in the banking sector where a sharp rise (+33 percent) was recorded. Employees older than 50 were hit hardest (+70 percent). Proportionally, the number of new benefits fell most rapidly in the sectors retail chain stores (-61.7 percent) and construction (-49 percent).


Decline unemployment among over-45s levels off

Unemployment has declined since early 2014, initially among young people and 25 to 44-year-olds. The decline among over-45s followed two years later, but the rate in this age group fell more rapidly. Late 2016 and early 2017, the decline in unemployment among over- 45s levelled off and remained stuck at almost 5 percent of the labour force, but unemployment among under-45s continued to fall.

Altogether, 4.3 million people in the age category 15-74 do not have paid work; 473 thousand are unemployed and nearly 3.9 million are not looking or immediately available for work. With 2.2 million, women constitute the majority in the latter group.

Unemployment is falling because the people who find work outnumber those who become unemployed. Over the past three months, 123 thousand previously employed individuals became unemployed. In the same period, 85 thousand individuals who were still employed three months ago became unemployed. The decline in unemployment was slightly tempered as the number of job seekers who could not find work (172 thousand) was higher than the number of people who gave up looking for work (160 thousand). 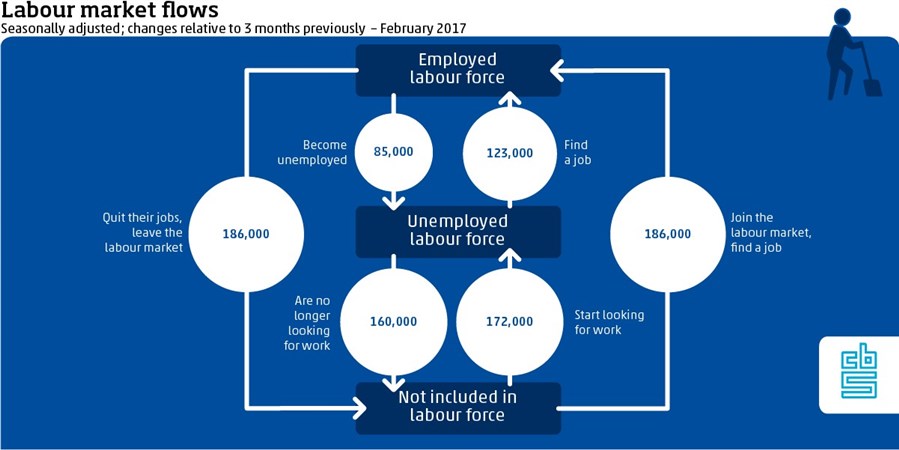 Unemployment further up in July

Household consumption over 5 percent up in June