Diabetes type 2 is more frequently found in older people, whereas type 1 also affects young people and incidence appears not to be age-related. Type 2 is primarily found among over-40s. The Health Survey shows that 1.8 percent of 40 to 49-year-olds are diagnosed with diabetes type 2, increasing to nearly 8 percent among 55 to 64-year-olds and to nearly 15 percent among people aged 75 years or older.

Registration data show that 4.7 percent in the Dutch population (800 thousand individuals) were prescribed anti-diabetic medicines in 2014, as against 3.8 percent in 2006. However, the number of GP-registered diabetic patients is higher: nearly 1.1 million in 2014. Possibly, not all patients take medicines to treat their diabetes.

Relatively few diabetics in the Netherlands

The percentage of reported diabetics is relatively low in the Netherlands compared to other European countries. The only countries where the share of diabetic patients aged 15 years or older is lower are Romania, Sweden, Belgium, Austria, Denmark, Latvia and Lithuania. With 10 percent, France has the highest share.
With respect to obesity, the situation in the Netherlands is even more favourable. Serious overweight only occurs less frequently in Norway, Romania and Italy. Malta tops the European list; more than one-quarter of the Maltese population aged 15 years or older suffer from obesity. 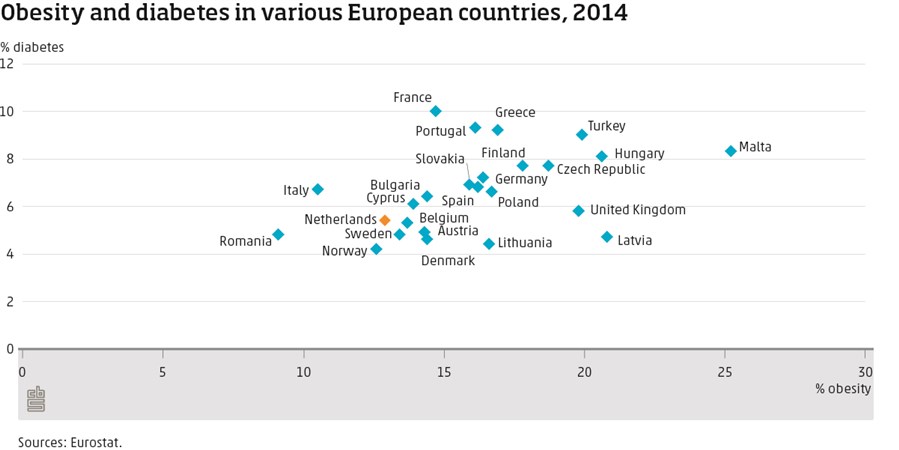