Four out of five new homes are for built for owner-occupiers, one fifth was for the rent sector. Three-quarters of new homes were one-family houses..

South Holland in the lead, largest growth in Groningen 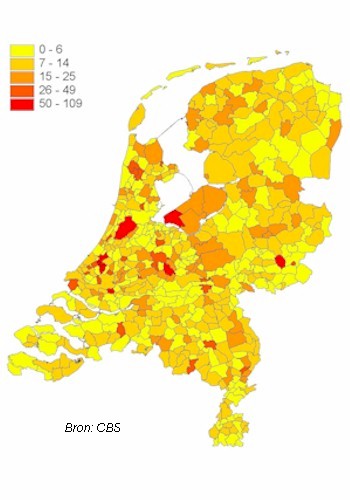 In 2001 eleven new homes were built for every thousand existing ones. The increases were largest in the so-called Vinex locations, municipalities near the four large cities in the west of the Netherlands designated as growth areas by planners in the first half of the nineties. These Vinex municipalities are: Leidschendam, Nootdorp and Pijnacker near The Hague; Haarlemmermeer and Almere near Amsterdam, Houten near Utrecht and Barendrecht near Rotterdam.

Homes for which building permits were granted per province

This slight revival in home construction in 2001 is not expected to continue. Fewer permits were granted in 2001, than in the preceding year, continuing the recent trend. At 62 thousand the number of permits was twenty percent down on 2000.

The fall was observed in all provinces, with the exception of Groningen and Friesland. The province of Flevoland had the largest fall: in 2001 the number of permits for new homes was half the number in 2000.

Mortality during the coronavirus crisis

Consumer confidence, second half of May

Supplemental survey, in addition to the first measurement.

Overnight stays in the Netherlands in March

Fewer weddings during the coronavirus crisis

Renewable energy consumption up by 16 percent