This table contains data on tourist expenditure. Tourism is not an industry in itself, but covers a wide range of products and services delivered to tourists from different industries. The table contains the sales of resident enterprises to resident and non-resident tourists, as well as the expenditures of resident tourists abroad. The figures are consistent with the conceptual framework of the National Accounts (NA ) and can be compared with existing macroeconomic indicators such as gross domestic product, the total value added and the total number of jobs in the Netherlands. The tourism accounts offer an integrated macroeconomic overview of the importance of tourism to the economy.

Status of the figures:
Data from 2010 up to and including 2015 are final. Data of 2016 are provisional. Since this table has been discontinued, data of 2016 will not become final.

Changes as of 29 August 2018:
None. This table has been discontinued.
Statistics Netherlands has carried out a revision of the national accounts. New statistical sources and estimation methods have been used during the revision. Therefore this table has been replaced by table Tourism; expenditure, National Accounts. For further information see section 3.

Value at current prices
Figures are expressed in prices of the relevant reporting year, million euro.

Volume indices
The volume compared to the volume of the base year. Fixed prices, base year 2010. 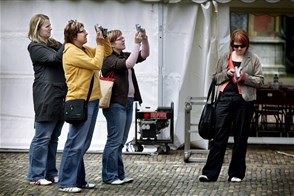