Statistics Netherlands (CBS) is increasingly using statistics based on Big Data and therefore needs to experiment with innovative visualisation techniques which help present the jumble of data in a more orderly fashion. Among these new techniques is the dot map, displaying huge amounts of data all at once. With this particular type of map, users can obtain detailed information on municipalities and neighbourhoods at a glance. The map shown here as an example displays the number of residents in each Dutch neighbourhood as well as their backgrounds, without compromising their privacy. 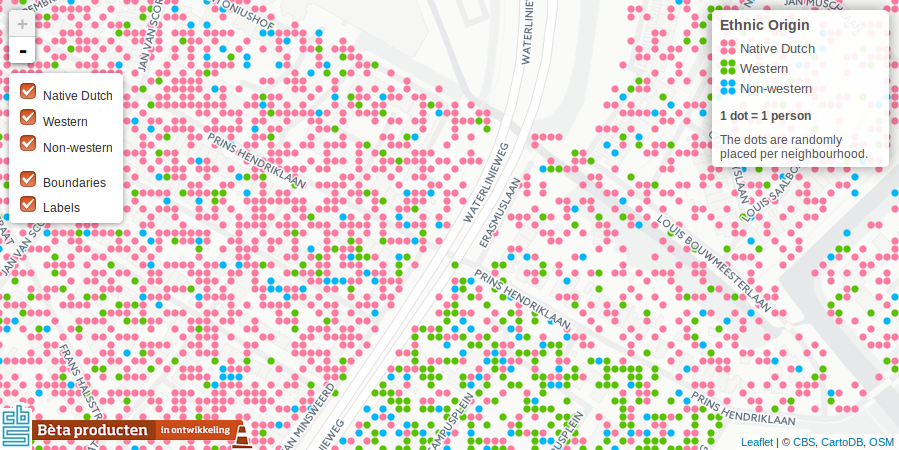 Each resident is a dot

The privacy of individual residents was taken into account during the development of this map: dots have been placed at random around a neighbourhood. The dots do not correspond with the physical addresses of residents, thereby safeguarding their privacy. Furthermore, no dots were placed in areas where population density is lower than 1,000 per sq km so as to prevent any other form of identification. As population numbers have been rounded to the nearest five at random, numbers may deviate by a maximum of five per neighbourhood from the actual numbers. 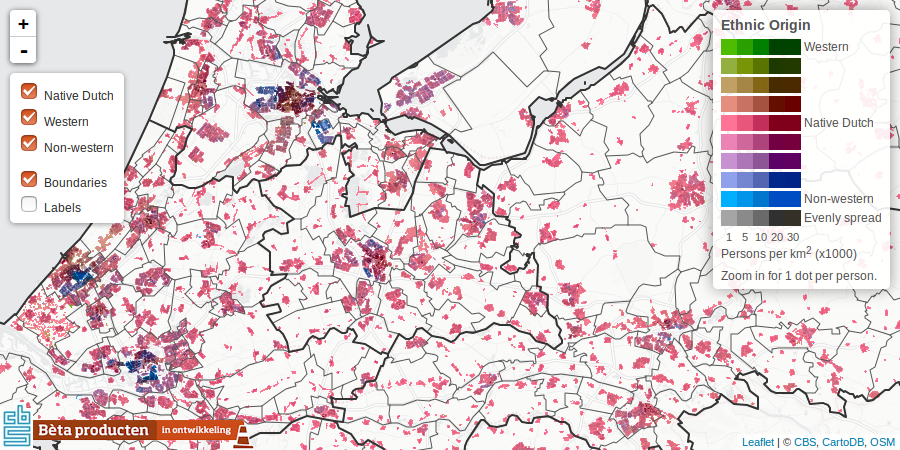 When zooming out on the map to view the entire country, the dots are no longer visible. They are replaced by a coloured area for each neighbourhood. The ratio between the various background groups in a neighbourhood is indicated by the colour. For example, purple represents neighbourhoods occupied mainly by a mix of residents with a native Dutch background and those with a non-western migration background. The darker the hue in a particular area, the denser the population. One advantage of the dot map compared to other visuals is that it can show both population density and background.

Adjust the map to your needs

Zooming in is done by clicking on the plus (+) sign in the upper left corner of the map. The legend alternately changes to a description of the dots when it is zoomed in and to colour areas when zoomed out. The proportions of different background groups are represented by a colour scale which runs from top to bottom in the legend. The colour hues which represent population density run left to right. The different map layers can be switched on and off in the upper left corner of the map. For instance, you can select specific background groups, or show provincial and municipal borders.

The residential areas have been defined based on our land use register from 2012. Therefore, some newly developed areas may not be represented by dots yet.

Using this visualisation method, all sorts of regional data can be represented while also allowing scalable output of larger data sets. Such data could pertain to individuals, households, dwellings or businesses, but could also map other items, for instance the number of farm animals in one’s own neighbourhood: how many chickens, pigs or cows are there?